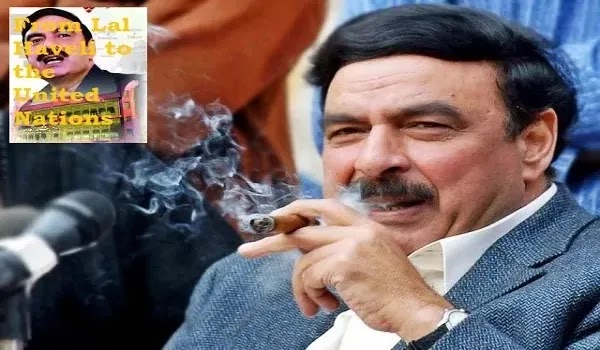 Federal Minister for Railways Sheikh Rashid Ahmed’s book ‘From Lal Haveli to the United Nations’ has made many major political revelations.


Several excerpts from Sheikh Rashid’s new book have surfaced, in which several major political revelations have been made.


From Kitab Lal Haveli to the United Nations, it was reported that when the Independence March was attacked in Gujranwala, Imran Khan called PML-N Home Minister Chaudhry Nisar from a container.


Sheikh Rashid said in his book that Imran Khan kept his movement separate and unique from Tahir-ul-Qadri’s movement. When 34 members of PTI resigned, there was a political earthquake.


The book says that Imran Khan wanted to overthrow the Nawaz Sharif government in any case. The decision to go to the National Assembly and the TV station was made in a container, with which Javed Hashmi did not agree.


The federal minister said in the book that during the sit-in, Imran Khan sent a message to the Chinese ambassador that if the Chinese president came to Pakistan, he would clear the way.

Referring to the martyrdom of Benazir Bhutto, Sheikh Rashid wrote in his book that it is not true that his relationship with Asif Zardari was strained before Benazir’s assassination.

He further wrote that no case was registered against the persons who were suspected 24 hours before the assassination of Benazir Bhutto while the real killers of Benazir Bhutto were honorably acquitted due to non-compliance of PPP.


Sheikh Rashid revealed that the Chaudhry brothers were not in favor of giving NRO to Benazir Bhutto. Time proved Musharraf’s position wrong and Chaudhry’s right.


The federal minister said in his book that if Pakistan had signed the NPT, the United States could have cordoned off its nuclear facilities.


Sheikh Rashid said in his new book that the tragedy was taking place from the Chief Minister’s House in command and control of the Model Town operation.

Launchbox Rom Management: Is any other ROM management app required?

How To Fix Hulu Keeps Freezing and Buffering Issues?