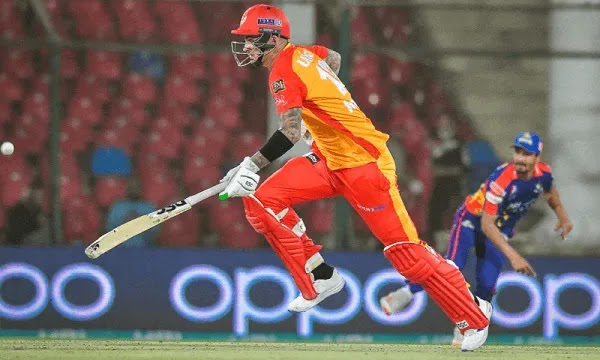 In the sixth match of Pakistan Super League (PSL) 2021, Islamabad United batted brilliantly and scored 197 runs for the loss of 5 wickets in the last over, the biggest target of the current season given by Karachi Kings. Achieved and achieved a memorable victory.

Earlier, in the sixth match of PSL 2021 against Karachi Kings Islamabad United, Babar Azam and Sharjeel Khan scored 196 runs for the loss of 3 wickets in the stipulated overs thanks to the brilliant batting and record opening partnership.

In the match played at National Stadium Karachi, Islamabad captain Shadab Khan won the toss and elected to field first.

Initially, both the batsmen played a cautious game but then both of them moved forward aggressively, and both the openers scored half-centuries.

This is the third partnership of more than 100 runs in PS by Karachi Kings. Meanwhile, Sharjeel Khan scored a half-century in 32 balls, Alex Hales dropped his catch when he had scored 70 runs.

Babar Azam continued to bat responsibly from the other end and completed his half-century in the 13th over with sixes off 39 balls.

Islamabad United fast bowler Sharjeel was dismissed for 126 and was playing at 70 at the time, but the umpire pointed out that it was the nine balls on which he returned to bat.

United’s bowlers continued the no-balls and gave Babar Azam two chances on nine balls, as a result of which PSL’s biggest partnership was 159 runs, which was previously held by Multan Sultans.

Sharjeel Khan took full advantage of the opportunity and completed his second century in the league.

Islamabad United had to wait a long time for the first wicket and on a total of 176, Alex Hales dropped another catch to Babar Azam but this time he was run out.

Hassan Ali LBWed Sharjeel Khan on the second ball for the second wicket in a row. Sharjeel was dismissed for 105 off 59 balls, including 9 fours and 8 sixes.

Karachi Kings scored 196 runs for the loss of 3 wickets in 20 overs.

A record breaking opening stand took @KarachiKingsARY to the highest score in #HBLPSL6. Can @IsbUnited chase it down?

In pursuit of the biggest goal of the event so far, Islamabad United did not have a good start and Phil Salt was already caught in the over trying to play a high shot on Emad Wasim’s spin ball.

Islamabad’s second-out batsman Shadab Khan returned without giving his share of the 13-wicket haul to Mohammad Amir, but then the team’s incoming batsmen took an aggressive approach and upset the Karachi Kings. ۔

Alex Hales had a very poor performance in fielding but tried his best to make up for it in batting and in the first 5 overs, the team scored 68 runs but was dismissed for 46 runs.

Faheem Ashraf also gave full support to Alex Hales but after Hales he also got out quickly and he scored 25 runs off 15 balls.

Iftikhar Ahmed and Hussain Talat batted responsibly and put the score ahead at a good pace.

Hussain Talat along with Iftikhar brought the team to a good position and scored 42 runs and got out on the ball of Muhammad Nabi, at that time the score of United was 176 runs.

Karachi Kings captain Emad Waseem said that the batting of Islamabad United is good while our bowling line is strong and we have to bowl well by scoring maximum runs.

“We have to work harder in bowling and try to keep Karachi to a minimum,” said Islamabad United captain Shadab Khan.

Both teams consist of these players: