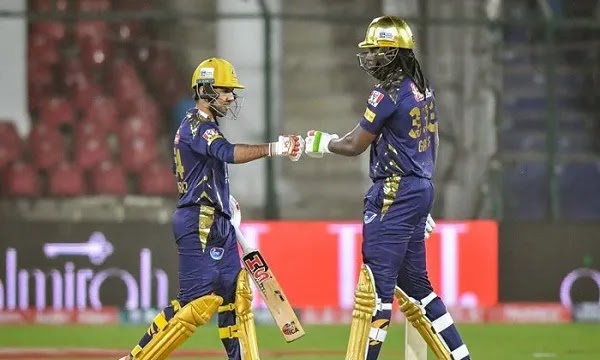 In the fourth match of the sixth edition of the Pakistan Super League (PSL), Quetta Gladiators gave Lahore Qalandars a target of 179 runs to win.

In this match being played at the National Stadium in Karachi, Lahore Qalandars decided to bowl first after winning the toss.

Gladiators openers Tom Benton and Saeem Ayub were dismissed for 4 and 3, respectively, when the team’s score was 12.

In such a situation, Chris Gayle and Sarfraz Ahmed of Gladiators used their experience to get the team out of difficulties and formed a century partnership to lead the team to a big total.

Sarfraz Ahmed scored 40 off 5 fours while Chris Gayle hit 68 off 5 fours and the same number of sixes. Both the batsmen returned to the pavilion for 113 and 118 runs respectively.

In the closing moments, Muhammad Nawaz played an innings of 33 runs to take the team to a total of 178.

Harris Rauf was the most successful bowler for Lahore Qalandars who took 3 wickets while Shaheen Shah Afridi, Rashid Khan and Ahmed Danial took one wicket each.

It should be noted that in the first match of the event, Lahore Qalandars made a victorious start and defeated Peshawar Zalmi by 4 wickets.

Quetta Gladiators, on the other hand, are looking for their first win, as they lost their first match in the event to the Karachi Kings by 7 wickets.

Criss Gyle is Playing his last PSL match this year. He will not be available for coming PSL group matches.