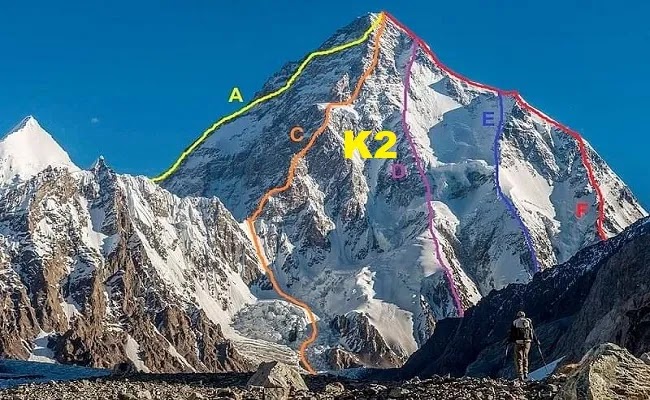 What Happened To Ali Sadpara Missing Climber on K2: Here are some key technical tips for finding missing climbers:

As a junior mountaineering student, I have been studying Himalayan mountaineering adventures for the past 10 years. Detailed research and study of mountain structure, climate change, climbing routes, challenge levels, successful and unsuccessful expeditions, and mountaineering accidents have also been part of my study journey.

In the meantime, I have been presenting many research articles so that better information can be accessed to the ordinary Pakistani who loves the mountains. So in light of my limited but important information. Here are a few suggestions regarding the recent K2 crash.

History of K2 with Technical Details

Remember that among the climbing routes of K2, the most preferred route by climbers around the world is undoubtedly Abruzzi Spur or Abruzzi Ridge. To date, more than 75% of missions have been conducted on this route. Recent K2 winter expeditions have also been carried out on the Abruzzi Route.

In addition to this route, another important route is called Cesan Route or Basque Route. This is actually South-SouthEast Spur. It joins the Death Zone around the shoulder section at Camp 4 of the Abruzzi Route at an altitude of 8000 meters, and the two routes merge. In the picture below, line E represents the same Cesan Route while Abruzzi Route is marked with line F.

The problem with the Chase Route is that the whole route consists of a mixed area of ​​rock nice, which is the most technical and most difficult challenge in terms of climbing. The rocky portion above the Chain Route is actually on the left side of the popular bottleneck section in the Death Zone and just below the Traverse section.

In this regard, a month ago, Nepali Sherpas had expressed that with the permission of the Pakistani authorities, the new route could be improved by installing bolts and ladders to avoid bottleneck section and over-hanging seracs, so that bottleneck in K2’s death zone and To avoid the hazards of seracs.

But there is an abomination in this and that is that climbers will have to do rock climbing at about 8200 meters which will be the most difficult task. Because even if you avoid over-hanging seracs, the risk of rockfall will still be there. My personal opinion is that this improvisation of the route may not be feasible.

Muhamad Ali Sadpara was a famous Pakistani mountaineer. He and his team successfully climbed nanga Parbat for the first ever in 2016 in winter.

Ali Sadpara and his teammates, Alex Txikon and Simone Moro have gone on record stating with Sadpara’s brilliance. He had successfully climbed 8000 feet for four-time in one calendar year and a total of eight times in his career.

Muhammad Ali Sadpara and his son, Sajid Sadpara, who had climbed K2 in 2019 successfully, Starts the mission of climbing K2 in winter o 4th February 2021 and along with Icelandic mountaineer John Snorri Sigurjónsson, and Chilean mountaineer Juan Pablo Mohr Prieto.

They leave the camp on the evening of February 4th, 2021 but Sajid sadpara had to come back because of a technical issue from Bottleneck.

His father, Mohr, and Snorri kept climbing up, but they didn’t come back by night according to the plan.

A rescue mission started with two army helicopters on 6th February 2021 but failed to find the climbers on K2. The three climbers are still missing and there is more than a 99 percent chance of their deaths.

Now let’s come to the real issue of what happened to Ali Sadpara’s team and How to find Ali Sadpara. Let’s take a look at it.

First of all, in the history of mountaineering, only about 400 climbers have climbed K2 so far, while 87 climbers have died during this period. Of the total 87 deaths, 91% occurred in the death zone around the bottleneck section.

Climbers who reach an altitude of 7,800 meters at Camp 4 for a summit push begin climbing at about 11pm or later at night and try to enter the Death Zone before the first rays of the sun fall. Cross the over-hanging seracs and bottleneck section first as the snow on the serac in the morning is more compact and less likely to break and fall.

If we talk about the speed of the climbers, it is said that it takes about 6 hours to pass through this section, and every time you cross the traverse and reach the summit ridge of K2, you are just below the over-hanging ice Yes, the shadow of death, the shadow of fear and the senses have to be overcome. Climbing is also technical.

There is no such challenge in the Death Zone at any of the 8,000 peaks in the world, not even the killer mountain Nanga Parbat does not have a climbing technique after 7,600 meters. That’s what makes K2 a wild mountain.

According to Sajid Sadpara, son of Ali Sadpara, when he started hallucination in the death zone and his father sent him back due to a faulty oxygen mask regulator, it was already 10 o’clock in the afternoon and Ali Sadpara’s team was at 8200 or 8300 meters. That is, the bottleneck was on the most dangerous part of the section.

After crossing the 91-meter bottleneck section, the traverse comes. You have to stick to the ice-wall of the same traverse and walk on the fixed-line. There are a total of three dangers at this point. No. 1 Break a lump of ice from over-hanging seracs or cut a fixed-line. No. 2: A rope of the fixed-line may break suddenly, and number three is that your foot slips due to exhaustion or lack of focus and you are forced to pull the fixed-line due to the friction of your weight.

In all three cases, you will hang like a pendulum and since there is more than one climber on the fixed-line you will all fall down due to the weight. At the very bottom is the rocky portion I mentioned above, above the Chain Route. It is technically called Abyss. Now, what is this abyss? Get to know it first.

Where there is the air on the earth but there is an empty hide or depth, it is called abyss, while above the earth where there is no air, it is called space. So when a scale falls into the abyss, it will fall on the rocky or mix ice n rock portion above the chain root. And unfortunately, what falls there will not be a slide but a hit.

There is almost no chance to find missing climbers alive

Therefore, in this case, the technique of self-arrest will not work and there will be no chance of recovery, but it is very possible that immediate death will occur due to broken bones or head injury. And if fortunately, you survived by falling on the rocks, you will be severely injured. And exposure.

There can be no bivouac in this area because there is no snow. So we will have to suffer a very painful death. That is why many European climbers carry euthanizing injections to avoid such a painful death, to avoid a painful death, and to go into a state of drowsiness to get an easy death.

On January 16 this year, the Nepali Sherpas were the lucky ones to find powder snow on the bottleneck and traverse, which would have strengthened the grip of their feet, and they climbed comfortably on the fixed-line without slipping and became K2 head.

But perhaps power did not approve, so Sadpara’s team certainly fell victim to one of the three possibilities mentioned above from the fixed-line and fell down to the rocky portion. If that happened then the heli search would be useless.

While the biggest challenge for the ground rescue team is that they are not fully acclimatized and secondly, even if they reach the death zone, they will have to cross the bottleneck and traverse to reach the summit ridge. Will look alive or dead.

In the current scenario, the failure of three days of continuous heli search means that the missing climbers do not fall into the icefield on the Chain Route below 8000 meters, otherwise they are not visible. And if they’re on a rocky portion, then helicopters don’t even have the ability to fly there.

If there is a miracle from Allah, then one will be thankful and the prayers of the people will be answered. If it is declared to be dead, then only if the climbers who came on the K2 expedition this summer and reached the death zone, it will probably be possible to spot the dead bodies of the missing climbers. Otherwise, the memories of these three brave climbers are part of history.

(Back to the article: The purpose of my writing is not to offend anyone at all, but it is a small attempt to enlighten the true spirit of mountaineering with purely good intentions.

(Publish in Good Faith and for Educational Purpose)