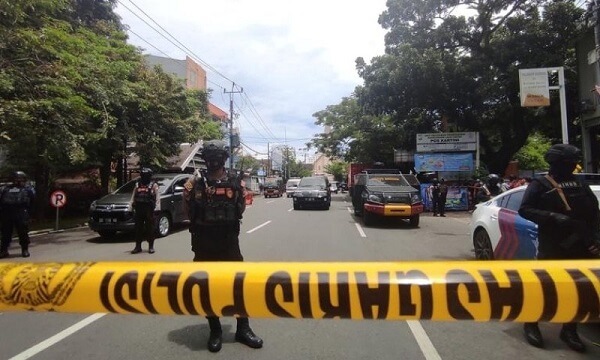 According to Indonesian police, two suspected suicide bombers blew themselves up outside a Catholic church on the first day of Easter Holy Week in the Indonesian city of Makassar, injuring 14 people.


Foreign news agency Reuters reported that police said the number of people inside at the time of the blast outside the church slyuysy island.

Initially, local police said the attacker had done it alone.

Authorities are investigating what organization the attackers belonged to and whether the attack was linked to recent arrests of suspected militants, police spokesman Argo Yuono said.

Read also: 7 People Were Injured in a Shooting Outside a Bar in the United States

In January, the anti-terrorism unit raided a militant hideout in Makassar and killed two people whom police suspected were involved in two bombings at a church in the Philippines in 2019. More than 20 people were killed.

Referring to the recent incident, the pastor of the church, Williams Tilak, told Indonesian media that a suspected bomber tried to enter the church on a motorcycle but was stopped by a security guard.

Security camera footage showed an explosion that sent flames, smoke, and debris down the road.

Police did not say who was responsible for the attack, nor did they immediately claim responsibility.

Police have blamed the ISIS-affected Jamaat-ul-Lashuri Daulat group, which was involved in suicide attacks on churches and police checkpoints in Surabaya in 2018, killing more than 30 people.

Makassar Mayor Danny Pomanto said the death toll could have been much higher if it had been at the main entrance instead of the church’s side entrance.