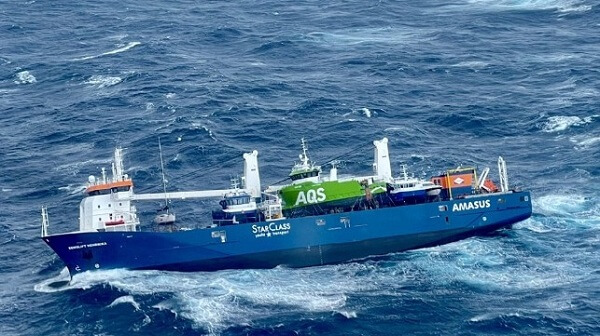 A Dutch-flagged heavy-lift cargo ship, the 4,200 dwt Eemslift Hendrika, called for assistance earlier today after the cargo aboard the vessel shifted in a storm as the vessel was sailing north along the Norwegian coast.

The lift ship had departed Bremerhaven, Germany bound for Kolvereid, Norway. Norwegian rescue authorities report that the 336-foot-long vessel was approximately 60 nautical miles west of Alesund, Norway when parts of its cargo shifted causing the vessel to list between 15 and 30 degrees to starboard into heavy seas.

The Norwegian authorities initially dispatched three helicopters and two rescue vessels to coordinate the efforts on the scene. Arriving at the vessel, they reported seas were running 10 to 15 meters and winds were a strong to severe gale with maintained speeds over 40 mph.

Initially, it absolutely was decided to airlift eight of the twelve crew members from the vessel to Alesund. The captain and three crew members remained aboard during the day attempting to steer the Eemslift Hendrika into the weather and stabilize the cargo.

The Norwegian authorities assisted by airlifting two bilge pumps to start pumping out seawater that was leaking into the cargo area.

The vessel’s owner told the Norwegian media that true was stable aboard the vessel and that they were hoping that the weather would subside in order that the vessel could proceed to a close-by port.

Late reports from the Norwegian authorities however are that the weather had not calmed and by late within the day, the captain felt it had been not safe for the crew to stay aboard. The captain and three remaining crew members were airlifted off the ship by a Norwegian SAR helicopter. Some reports indicate that one among the crew members was injured and was taken to a hospital.

The Norwegian Coastal Administration and also the company were reported to be functioning on the inspiration for handling the vessel in hopes that it might remain afloat overnight, which the weather would calm sufficiently to allow a salvage effort.