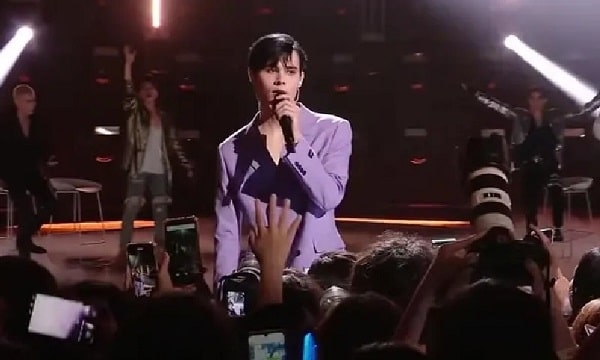 A young man from Russia Trapped in “The Captivity” a Chinese reality show has finally been Voted Out/ Released, he has been fighting for three months.

27 years old Vladislav Ivano, accidentally joined the Chinese boy band’s reality show and surprisingly reached the final, despite urging people to vote for him and remove him from the show.

After about 3 months, his wish was finally fulfilled and he failed in the final.

Vladislav Ivanov speaks Chinese and was part of the show as a translator.

However, after seeing his personality, the director invited him to be a part of the show as a candidate and asked if he would like to try a new life.

He was ready, but soon after he began to regret his decision, but due to the contract could not leave the show.

That’s why he was seen recklessly singing, dancing, and doing other things in the show.

“It’s not my dream to be a member of a boy band because I can’t sing and dance, I expect the judges won’t support me, others want an A grade but I want an F because then I have freedom.”

Vladislav Ivano, who performed on stage under the name Lee Lush, urged the public to vote against him and remove him from the show because he did not want to win the show, which would have to be part of a boy band.

But the audience liked it a little too much and kept it part of the show for 3 months.

Such singing shows are very popular in South Korea and China.

Candidates participating in the show were placed on an island in Hainan Province and their phones were confiscated, while those who want to leave in the middle of the show will have to pay heavy fines.

Critics have questioned the transparency of voting on such shows, but Vladislav Ivano’s anti-hero style has touched the hearts of Chinese viewers.

Fans even called the Russian teenager a “most pitiable slave” and a popular Chinese conception of defeatist behavior.

Thus, Vladislav Ivanov reached the final of the show, which took place on April 24, and failed due to insufficient votes.

On April 25, the cheerful Russian youth said in a video on his Weibo account, “I finally managed to get out of work.”

The hashtag of separation from the show was viewed more than 180 million times on Weibo, and the Russian embassy reposted it, saying, “Congratulations, have a good time.”