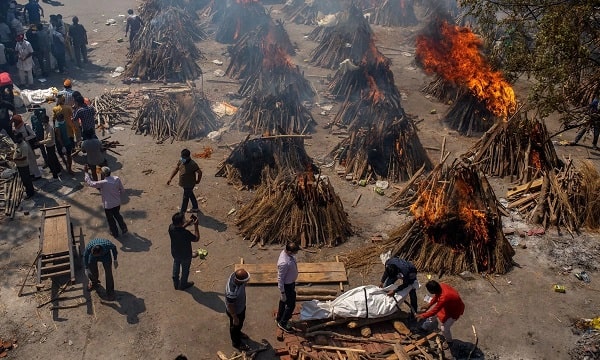 New Delhi: Corona disease has wreaked havoc in India, with hospitals overflowing with patients and hospitals shutting down more due to lack of oxygen. The death toll from Corona has risen alarmingly.

According to the foreign news agency, Corona’s disease has turned into a tsunami in India. Hospitals are overflowing with patients, while due to lack of oxygen, hospitals have stopped admitting more patients and paralyzed the medical system. Many hospitals have given SOS signals.

A few hours of oxygen remained. During the twenty-four hours in India, 346,786 new cases of code were recorded. Which is a world record of cases on a daily basis.

In all the hospitals in India, patients are seen lying in the corridors and courtyards for which beds are not available. Citizens are carrying cylinders in search of oxygen. The views of crematoriums and cemeteries are breathtaking. There are queues of dead bodies and no place for their last rites.

The death toll from Corona has risen alarmingly. Every four minutes in Delhi, one Kood patient dies. The Indian government has run trains for emergency oxygen supplies, while military planes have been sent from Singapore for emergency imports.

Public outrage is mounting after the paralysis of the medical system and there is a risk of law and order in India.