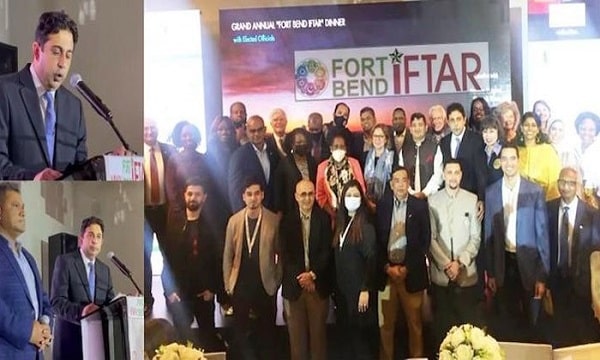 An interfaith Iftar dinner was held in Fort Band County, Houston, hosted by Aaron Mughal, who co-hosted the Iftar dinner with local organizations.

The Iftar dinner was attended by more than 65 elected representatives, members of Congress, members of the Texas State Assembly, top officials, judges, interfaith leaders, the Consul General of Pakistan, and a large number of city elders.

A food drive was also organized on the occasion. During the Iftar dinner, Texas Governor Greg Abbott, in his video message, congratulated the Muslim community on the occasion of Ramadan through this Iftar dinner and said that we are happy with such events. Promoting peace in their state.

Speaking on the occasion, Sheila Jackson-Lee, a member of the US Congress and chairperson of the Pakistani Cox in the US Congress, said that the newly elected US President Joe Biden had brought a special message here. And a new America is emerging in the world today.

Addressing the event, the Harris County District Attorney congratulated the management of the Iftar Dinner and said that the first duty of the government is to protect all the people living here and help all the community members to lead a quality life.

Harris County is an intercultural county, he said, adding that 12 hate crimes cases were registered in the county last year. While this is not good news, the point is that we take strong action against any individual for committing a hate crime.

“In my view, hating anyone on the basis of color, race, religion, or affiliation with a country is a serious crime, as it divides the community,” he said.

Ron Reynolds, a member of the Texas State Assembly, said: “We are proud of the Muslim community leaders in the state of Texas who carry the whole community together and continue to spread the message of love through this Iftar.

On this occasion, the organizer of the program Haroon Mughal thanked the guests while congratulatory certificates were also presented to the organizers of the Iftar Dinner by various high elected officials including Congress member Algerine.

The Governor of the State of Texas also officially announced Fort Band Iftar Day, on which occasion hundreds of people broke their fast with Muslims.