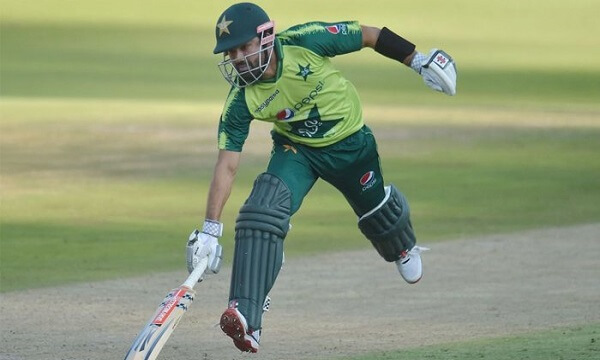 South Africa gave Pakistan a target of 189 for victory, which they achieved on the last ball of the last over at a loss of 6 wickets.

Pakistan broke its own record of chasing a big target in T20, after which the Pakistani team had successfully chased a target of 184 runs.

For the Green Shirts, Mohammad Rizwan hit two sixes and nine fours in an unbeaten 74-run inning and kept one end to the last.

The first wicket of the Green Shirts fell on the 5th ball of the fifth over. Babar Azam scored 14 runs off 41 balls and fell victim to Byron Hendricks.

The second wicket of the Pakistani team fell on the score of 86. In-form batsman Fakhr Zaman scored 27 runs and got out on the ball of Tabriz Shamsi.

Batsman Haider Ali, who was out in the fourth over, became the second victim of Byron Hendricks by scoring 14 runs. In the same over, Muhammad Nawaz also returned to the pavilion without scoring any runs.

Byron Hendricks took 2 wickets on two consecutive balls, then the team’s score was 132 runs for 5 wickets in 15.2 overs, it seemed that maybe the match could slip out of the hands of the Pakistani team.

However, Faheem Ashraf, who came later, played an excellent inning of 30 runs off 14 balls and made the victory of the team even easier. However, Hassan Ali completed the deficit, who scored 9 runs off 3 balls.

Mohammad Rizwan, who played brilliant innings of 74 runs by stopping the wicket from one end, was declared the best player of the match.

Earlier in 2018, Australia had given Pakistan a target of 184 runs in T20 which they achieved in 19.2 overs thanks to Fakhr Zaman’s 91 and Shoaib Malik’s unbeaten 43 runs.