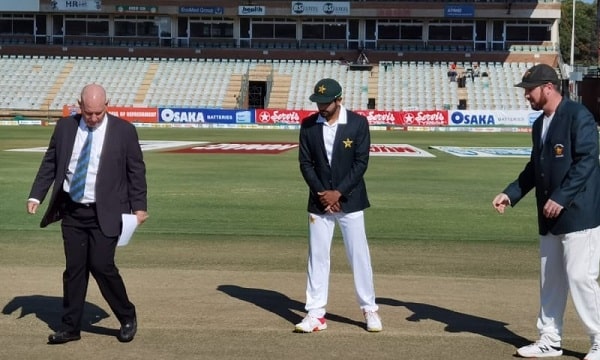 Zimbabwe won the toss and elected to bat in the first match of the two-match Test series against Pakistan.

In the match being played at Harare Sports Club, Sajid Khan is representing Pakistan while Narawa, Kaya and Shumba of Zimbabwe are making their Test debuts.

“We will retain the team that won the last match against Zimbabwe and try to maintain the combination,” he said.

“Zimbabwe’s conditions are difficult but we have adjusted here and adjusted ourselves, so we are trying to win the Test series as well,” he said.

Watch the live match on BSports or PTV Sports Youtube Channel,  You can also watch the Live Match between Zimbabwe vs Pakistan on the GeoSuper Live or PTV Sports live in Pakistan, In India on Star Sports 1 and Star Sports 1HD, and in South Africa on SuperSport live.

Both teams consist of these players:

Earlier in the T20 series, Pakistan had beaten hosts Zimbabwe 1-2.