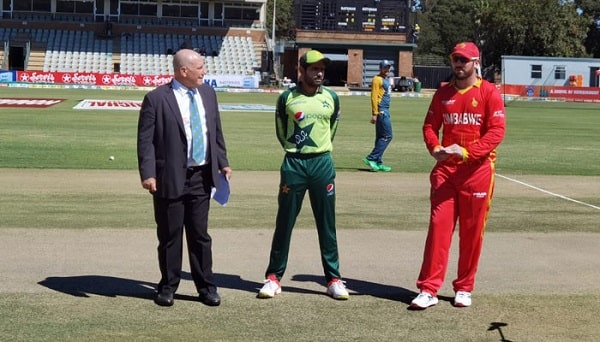 In the second T20 International between Pakistan and Zimbabwe being played in Harare, Pakistan has decided to field first after winning the toss against Zimbabwe.

Pakistan has made 2 changes in the winning team of the last match. Today’s victory will give Pakistan a decisive lead in the three-match series.

Asif Ali has been included in the squad in place of Haider Ali while fast bowler Arshad Iqbal will make his T20 debut today in place of Muhammad Nawaz.

Hosts Zimbabwe captain Brendon Taylor says after the toss that tries to score well against Pakistan.

The national cricket team management has decided to make two changes in the match after which Muhammad Nawaz and Haider Ali have been ruled out of the second match while Asif Ali has been included. Arshad Iqbal will make his debut in the second T20 match against Zimbabwe.

Watch the live match on PTV Sports Youtube Channel or You can also watch the Live Match between Zimbabwe vs Pakistan on the GeoSuper Live or PTV Sports live in Pakistan, In India on Star Sports 1 and Star Sports 1HD, and in South Africa on SuperSport live.

The T20 series between Pakistan and Zimbabwe consists of three matches. The third T20 match between the two teams will be played on April 25, followed by two Test matches. All three matches of the series will be played in Harare and spectators will not be allowed to enter the ground in view of Corona.

Earlier, Pakistan had beaten Zimbabwe by 11 runs in the first match. Muhammad Rizwan was declared the man of the match for his 82-run match-winning innings.