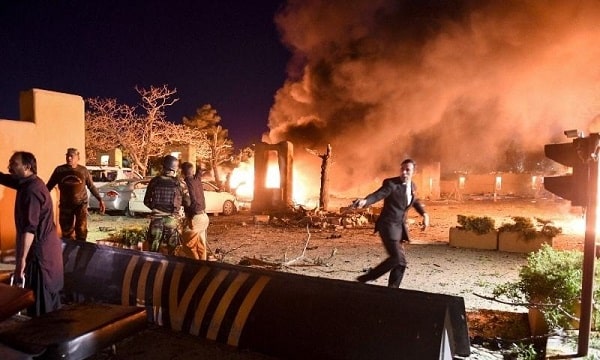 Four people were killed and 12 others were injured in an explosion in the parking lot of Serena Hotel on Zarghoon Road in Quetta.

The blast was reported and fire and rescue teams arrived at the scene and security forces cordoned off the area.

Quetta Deputy Commissioner Aurangzeb Badini confirmed on Twitter that 4 people had been killed and 12 injured.

The nature of the blast could not be ascertained while the injured were shifted to Civil Hospital.

Arbab Kamran Kasi, medical superintendent of Civil Hospital Quetta, confirmed the deaths and injuries and said the condition of the two injured was critical.

He said the hotel had been cordoned off and Anti-Terrorism Department (CTD) personnel had been dispatched to investigate the incident.

Talking to the media, the DIG Quetta said that according to the preliminary investigation, the blast was caused by the material installed in the vehicle and our CTD official was present inside.

He said that according to the initial information, 3 people were killed and 9 others were injured.

The blast damaged five to six vehicles and most of the injured are out of danger, he said.

According to the hotel’s website, “Serena Hotel is the only four-star hotel in Quetta where security and environment are in line with UN standards.”

Balochistan Chief Minister Jam Kamal condemned the blast and said, “I strongly condemn the bomb blast in the parking lot of Serena Hotel in Quetta.”

Quetta Deputy Commissioner Aurangzeb Badini said on Twitter that the injured had been shifted to a hospital and the situation was under control.

He appealed to the people to refrain from spreading rumors and panic.

*Serena Hotel Blast*
Casualties have been shifted to hospital. Situation is under control, people are requested to avoid rumours and don’t create panic.

Federal Information Minister Fawad Chaudhry said in a statement that “the Federal Ministry of Home Affairs is in close touch with the Balochistan government and a preliminary investigation is underway and the government will issue a statement as soon as the nature of the blast and the damage is determined.”

Last week, 12 people were injured in an explosion during a football match in Hub Tehsil, Lasbela District, Balochistan.

A powerful blast during a football match in honor of the Martyrs Police in the Allahabad Town area of Hub injured a dozen people.

Assistant Commissioner Lasbela Lieutenant (retd) Muhammad Ahmad Zaheer Hospital while talking to Dawn News after examining the patients said that two persons were injured in the blast but their condition is also out of danger.

It may be recalled that in February this year, two people were killed and five others were injured in a bomb blast on Enscombe Road near DC office in Quetta.

Deputy Commissioner Major (retd) Aurangzeb Badini had said that the blast was apparently aimed at the Kashmir Solidarity Day rally which was passing nearby.

It is to be noted that Balochistan has been suffering from unrest for the last few years and attacks on security forces, explosions, and various incidents have been taking place here, which is also said to be the hand of external enemies.

It is to be noted that Balochistan has been suffering from unrest for the last few years and attacks on security forces, explosions, and various incidents have been taking place here, which is also said to be the hand of external enemies.

Earlier, in the last month of 2020, bodies of people were also found in Balochistan, including firing and explosions on security forces.

On December 27, seven youths were martyred as a result of a terrorist firing on a Frontier Corps (FC) post in the Harnai area of ​​Balochistan.

A day earlier, two people were killed and seven others were injured in an explosion in the Panjgur district of Balochistan on December 26.

Police sources said that the blast took place during a football match at a local ground, which also damaged nearby vehicles.

On December 23, a terrorist was killed and another was arrested during an operation in the Silk Kaur area of ​​the Awaran district of Balochistan province, while a Pak Army Hawaldar was martyred in an exchange of fire.

On December 22, 10 suspected terrorists were killed in an exchange of fire with security forces during an intelligence-led operation in Awaran.

Earlier on December 21, a young Pakistani soldier was martyred by terrorists during an operation by security forces near Awaran district.