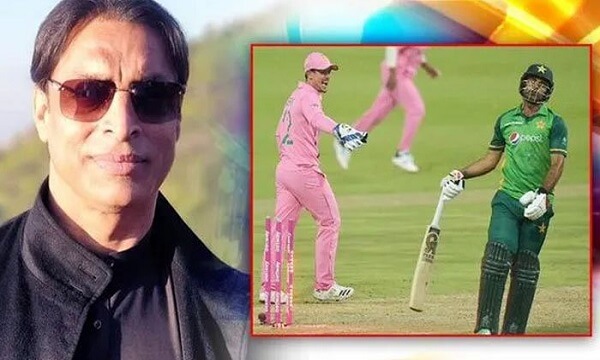 Former Pakistan cricket fast bowler Shoaib Akhtar reacted to South African wicketkeeper Quentin de Kock’s dismissal of Fakhr Zaman and then a sarcastic laugh, saying that what De Kock did was not the standard of a good game.

Former fast bowler Shoaib Akhtar has shared a video for cricket fans on his verified Twitter account in which he commented and analyzed the match.

What a master inning by @FakharZamanLive. Treat to watch. Single handedly brought the game here.
Sad end to the inning. Deserved a 200.
Was the spirit of the game compromised by South Africa & @QuinnyDeKock69 in that run out??

In the video, Shoaib Akhtar says, “Fakhr Zaman could not score 200 runs. I would not call it chatting but it is not the standard of a good game.”

Commenting on the existing cricket rules regarding the incident that took place during the game yesterday, the former fast bowler said, “Article 41.5 of the ICC rules clearly states that if you deliberately distract another player.

If they try to divide, an additional 5 runs will be given and at the same time the ball will be repeated and the runs scored by the player will also be added.

Sharing his video, Shoaib Akhtar wrote in praise of Fakhr Zaman that “Fakhr Zaman played a brilliant inning, it was fun to watch the match that Fakhr alone brought the match to an end.”

Regretting that Fakhr Zaman’s double century was not completed, Shoaib Akhtar said, “The end of the innings was sad. Fakhr deserved 200 runs.

It should be noted that the opener of the national team Fakhr Zaman was run out after being tricked by the South African wicketkeeper. In the match, Fakhr Zaman played a brilliant inning of 193 off 155 balls which included 10 sixes and 18 fours.