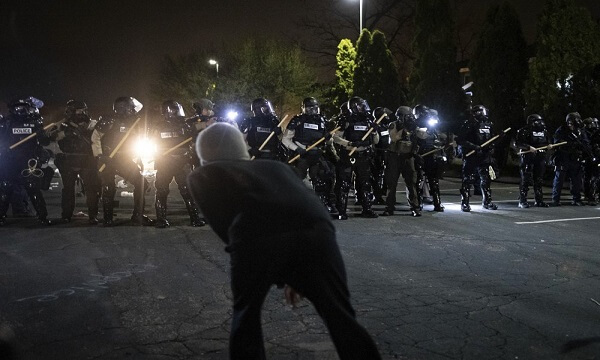 Mass shootings continue in the US city of Minnesota over the killing of a 20-year-old black man in a police shooting.

According to the family of the deceased, Donte Wright, the police opened fire on the young man before he got into the car and drove away, and he was later pronounced dead.

Demonstrations erupted at the Brooklyn Center earlier in the day over the killing of a young black man who was already awaiting trial of one of the four police officers involved in George Floyd’s death, according to the Associated Press.

Read also: Another Black Man Killed by US Police

The Brooklyn Center is located on the northwestern border of Minneapolis and has a population of about 30,000.

He said that the officers were stoned but a large number of protesters were dispersed at one o’clock in the morning.

He said law enforcement agencies were trying to contain the unrest and the National Guard was active.

Brooklyn Center Mayor Mike Elliott announced a curfew in the city until 6 a.m. Monday and said in a tweet that “we want everyone to be safe.”

Officers stopped a man just before 2 p.m. yesterday, according to Brooklyn Center police.

A police statement said that when the driver’s documents were checked, it was found that warrants had been issued against him, on which the police tried to arrest the driver but he fled in a car.

It was further said that the officer had fired at the vehicle which would have hit the driver and the vehicle had hit several blocks before colliding with another vehicle.

Protests against racism began in June 2020 in the US state of Minnesota after 46-year-old black man George Floyd died in police custody.

The unarmed black man killed by police in the US about 10 thousand people were arrested during the violent protests.

In addition, after violent protests broke out in several US states, Donald Trump described the protesting citizens as local terrorists and accused them of looting.

Violent protests erupted in August after another black man was shot dead by police.