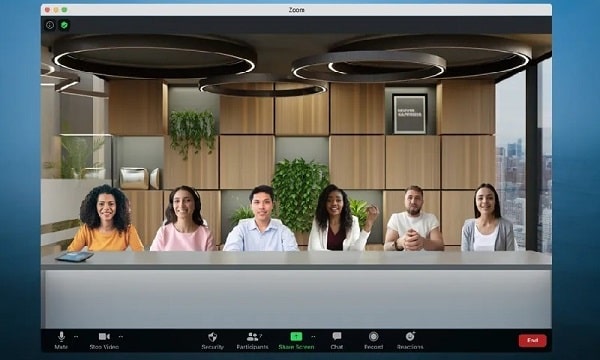 The popular video conferencing app Zoom has introduced a new feature, Emeritus View, which aims to improve the video background.

This virtual video background feature makes video calls look exactly like meeting in an office or at least it feels like it.

Zoom announced the feature at a conference last year, but it’s now available to free and pro accounts using the app.

This feature can accommodate up to 25 people and the company’s focus is on showing real-looking locations.

That is, instead of flag background, meeting hosts can enable this feature in the same menu where speaker view and gallery view are available.

When enabled, people who become part of the call automatically appear in the built-in virtual scenes, such as in a boardroom or auditorium.

Hostesses can resize participants and move them anywhere in the scene, Zoom said.

Of course, a B-image can be used for this background, but according to the company, the use of an image with a specific file type, aspect ratio, and resolution provides much better results.

If there are more than 25 people in the call, this feature will appear above the thumbnail scenes of additional people, while those who do not use the updated version of Zoom on mobile or desktop cannot be part of it.

Zoom is thought to have gained a lot of popularity during the Coronavirus epidemic, but with such a background, Microsoft teams and Skype have overtaken it.

Both apps have had such a feature since 2020 under Together mode.