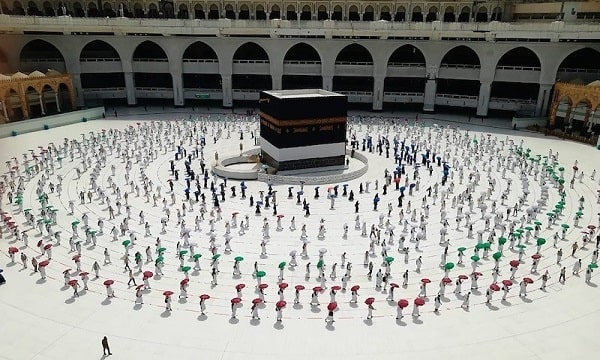 For the second year in a row, Saudi Arabia is considering banning foreign pilgrims from performing the Hajj in the face of a growing number of cases of coronavirus globally.

According to Reuters, two sources familiar with the matter said that consultations had been held on the ban but no final decision had been made on its implementation.

Prior to the epidemic, 2.5 million people traveled to Mecca and Medina each year to perform the sacred duty of Hajj, while Umrah continued to be performed throughout the year, benefiting the Saudi economy by 12 billion a year.

As part of Crown Prince Mohammed bin Salman’s economic reform plans, Saudi Arabia was committed to increasing the number of Umrah and Hajj pilgrims to 1.5 million and 5 million by 2020, respectively, and to those who come to perform Umrah by 2030 The number was planned to reach 30 million, while the revenue from Hajj alone was targeted to reach .3 13.32 billion by 2030.

Two sources familiar with the progress of the Hajj said that the authorities had planned to host overseas pilgrims, which has now been canceled, only local pilgrims who have been vaccinated or who have returned from Hajj will be allowed. He recovered from the virus at least six months ago.

A source said that restrictions would also apply to the age of the participants.

Another source said that initially it was planned that some pilgrims from abroad would be allowed to perform Hajj, but the types of vaccines, their usefulness and the complications that would arise after the emergence of new strains of the virus Forced authorities to reconsider their decision.

The state media office was contacted but declined to comment.

Last year, foreign pilgrims were banned from coming to Saudi Arabia for the Hajj, the first time in the kingdom’s modern history that Saudi citizens and a few locals were allowed to perform the Hajj.

India currently has the highest number of deaths reported in the world and according to a conservative estimate, one in four deaths in the world occurs in India.

Millions of pilgrims from around the world could be infected, and in the past some worshipers and pilgrims returned home with respiratory and other illnesses.

In February this year, the Saudi government banned all people from 20 countries except diplomats, Saudi nationals, medical professionals and their families from entering the country to prevent the spread of the new coronavirus.

The ban is still in place and the countries whose people have been banned include the United Arab Emirates, Germany, the United States, the United Kingdom, South Africa, France, Egypt, Lebanon, India, and Pakistan.