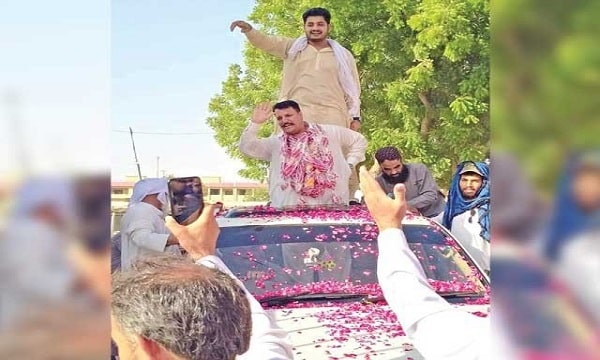 KARACHI: Anti-narcotics force arrested drug dealer Sarfraz Jadoon and his accomplice Irfan alias Chashma on April 8 with more than 37 kg of hashish and weapons and reached their home in Shirin Jinnah Colony while the accused marched from jail to home Brought to the fore.

According to the police, drug dealer Sarfraz Jadoon was arrested by SHO Inspector Wajid Hussain of Clifton Anti-Narcotics Police Station on April 8 at around 4.30 pm.

His accomplice Irfanullah Arch Chashma was arrested while a total of 37 kg and 200 grams of hashish was recovered from two white nylon sacks in a corner of the house on the identification of the accused.

During the search of the arrested accused Sarfraz Jadoon, a NADRA ID card in his own name, Member Shab Chamber of Commerce card, ATM card of a private bank, driving license, and Rs 1,500 were recovered. The said goods were recovered.

In addition to the 5 police officers and personnel present on the spot, 7 persons from the area were called as witnesses and a list of goods was compiled.

The 12 persons were called as witnesses and signed and the goods were put in white bags Sealed, the accused were brought to ANF Clifton police station and case No. 18/2021 was registered against the accused under Anti-Narcotics Act and Arms Act.

Sources said that the accused paid a very high fee and gave his case to an expert lawyer of ANF to fight his case on which the accused was granted bail in about a month. He was given a warm welcome on his release.

On the release of the accused, a procession of valuable vehicles was taken out from the jail to the house.

After breaking the fast, fierce firing was carried out in celebration of the release of the accused, and fireworks were also displayed. Expressed ignorance regarding firing and fireworks.