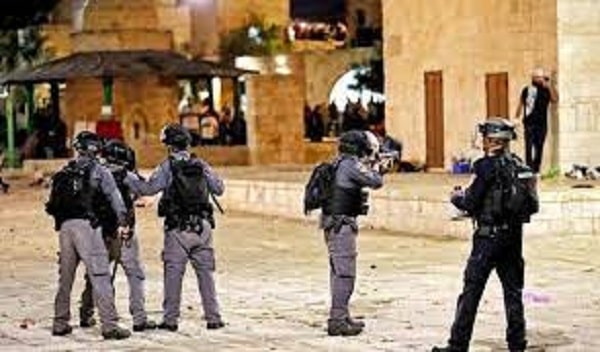 Demonstrations were held in different countries against the atrocities of the Israeli army in Al-Aqsa Mosque.

Hundreds of people demonstrated in front of the Israeli consulate in Istanbul, demanding an end to Zionist atrocities.

Demonstrations also took place in the British cities of London and Manchester, demanding the liberation of occupied Jerusalem and the establishment of a Palestinian state.

The demonstrators also called on the international community to unite against Israel in support of the oppressed Palestinians.

On the other hand, more than 300 Palestinians were injured by the Israeli army firing and tear gas shelling on unarmed Palestinians in the compound of Al-Aqsa Mosque.

More than 700 Palestinians have been injured in Israeli aggression since Friday.

The video of Palestinian girl Maryam Afifi went viral after her arrest by the Israeli army. She is smiling after Maryam’s arrest in the video.

Maryam said she was arrested for rescuing a girl from violence. She did not want Palestinian children to be raised in the shadow of fear.