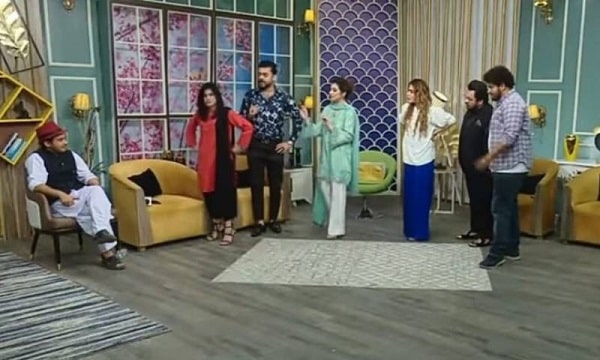 The Pakistan Electronic Media Regulatory Authority (PEMRA) has issued a show-cause notice to the private news channel Neo TV for broadcasting immoral and inappropriate words in the morning show.

A statement issued by PEMRA on its official Twitter account said that the Pakistan Electronic Media Regulatory Authority has issued a show-cause notice to Neo TV on the morning show aired on May 17, 2021.

It was further stated that the notice was issued for repetition, inappropriate and immoral words among the guests in the morning show, and irresponsible and unprofessional behavior of the host of the show.

PEMRA has sought a reply from the private channel on the issue within 14 days.

However, Basit Ali objected to the dance performances of the guests of the morning show, after which there was a heated discussion among the participants which was broadcast live by the channel.

In addition, a video clip of the discussion between comedian Basit Ali and other participants in the morning show was also uploaded on YouTube.

It can be seen in the video that after the dance performance ended, the host of the morning show Nabiha Ijaz asked Basit Ali that everyone was enjoying so much on music, so why didn’t he? Why didn’t you come

To which Basit Ali said, “This is not music. You are spreading obscenity in public. I did not know what the angle of your show is. Boys and girls are dancing like this. There is no way.”

Basit Ali said that society does not allow women to dance, so the anchor asked him if society allows them to come to the morning show, to which Basit Ali said that you people have called me, there is nothing wrong with comedy. , But dancing should not be allowed.

It can be seen in the video that the anchor asked to take a break as the discussion was long but a female guest refused and then Basit Ali raised the issue of Aurat march.

During this, the participants shook hands while the guest lady and Basit Ali continued to tease each other and inappropriate words were also used.

Later in the morning show, the host also reconciled the two guests.

After the video went viral on social media, Basit Ali was criticized by most users, while others called the channel wrong for broadcasting the debate live.

This is not the first time that No News has been criticized for airing a debate on a live program.

TV host Ayesha Ehtesham was also criticized for using inappropriate language by Khalil-ur-Rehman Qamar and it was being said on social media that the female host did not stop abusing the playwright. He also apologized to Marvi Sarmad.