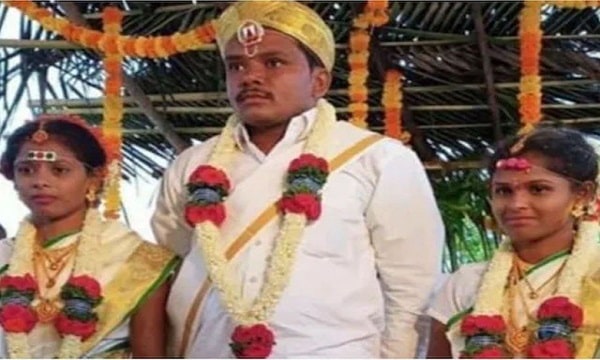 Karnataka: Police in India have arrested a groom who married two real sisters at the same time.

According to Indian media, a 30-year-old groom has been arrested in Karnataka for marrying two real sisters in the same pavilion. The 30-year-old Om Patti’s real sisters are nieces and nephews.

The bridegroom Om Patti says that he wanted to marry Lalita but Lalita said that in order to marry me you have to marry my elder sister Seria as she is deaf and dumb.

Om’s marriage to two real sisters took place on the 7th of this month, the pictures of which went viral on social media and reached the police, on which the law came into force and arrested the groom The priest who bathed, and the printer who printed the wedding card escaped.

Police say that apart from marrying real sisters, Lalita is only 17 years old and the minimum age for marriage is 18 years, while SOPs were not taken care of in the wedding ceremonies. Therefore, all those responsible will be arrested.