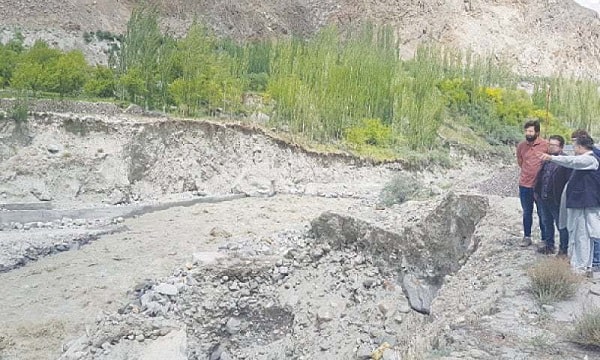 Gilgit-Baltistan: Increased discharge of water from Shusper Glacier Lake has frightened the people living near the lower reaches near Hassanabad.

In May 2018, the Mochuhar Glacier stopped the flow of water, which turned into a lake in the Shakespeare Glacier.

According to the Dawn newspaper, the district administration said that steps were being taken to deal with the emergency situation.

A glacier lake eruption could flood a section of the Karakoram Highway, a bridge, more than 100 houses in Hassanabad village, two power plants, a Frontier Works Organization camp office and hundreds of kanals of agricultural land.

In addition, it could affect drinking water sources for the central Hunza and disrupt the flow of the Hunza River.

Talking to Dawn, Hunza Deputy Commissioner Fayyaz Ahmed said that all possible steps have been taken to protect the important installations and residents in the area.

He said that the discharge of water from Shusper Glacier started on Saturday and reached 2,300 cusecs on Sunday.

He said the eruption of the lake in June 2019 and May 2020 affected four houses, 250 kanals of agricultural land, several fruit and non-fruit trees, a section of the Karakoram Highway and a hydroelectric station in the downstream areas.

Deputy Commissioner Hunza said that a protective wall has been constructed along the Hassanabad drain to protect the most vulnerable areas from a flood situation.

He added that if the flow of water continues at the current rate, 60 percent of water will be lost in the next few days.

He said that if the water discharge reaches 4,000 cusecs, three camps have been set up in the affected areas to evacuate the residents of 30 houses.