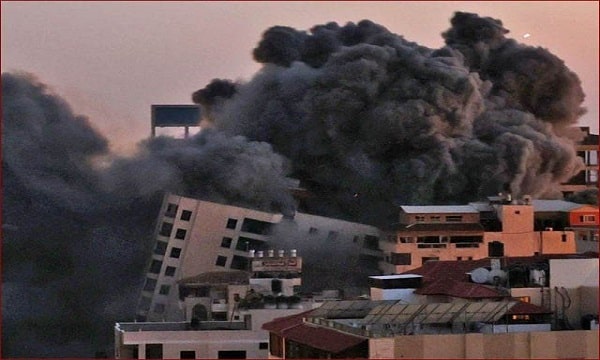 Gaza: The number of Palestinians martyred in the Israeli airstrike on Gaza has reached 28 while 150 people have been injured, including 10 children.

According to a foreign news agency, the clashes that started last Friday continued on Monday. Dozens of Palestinians were also injured in Yapar when Israeli police fired rubber bullets and Austin grenades at Palestinian protesters. A 13-story building was also destroyed in the Israeli attack.

In response to Hamas’s rocket attacks, Israel launched airstrikes in northern Gaza, killing 20 people as of Monday night, but the death toll rose to 28 on Tuesday. The Palestinian Ministry of Health has confirmed the 28 deaths.

According to the BBC, Hamas has confirmed that it fired 150 rockets at Israel, while Israel claims that 300 rockets were fired, most of which were destroyed by the defense system.

Israeli military spokesman Jonathan Conrex has claimed that a senior Hamas commander was killed in air strikes on Gaza. According to the BBC, Hamas sources have told them that the commander of the Izz al-Din al-Qassam Brigades, Muhammad Abdullah Fayyaz, was killed in the attack.

Israeli Prime Minister Benjamin Netanyahu has said that Hamas has crossed the red line, the current conflict will continue for some time in which Israel will respond with full force and those who attack us will have to pay a heavy price.

9 Palestinians were killed including 3 children in #Gaza pic.twitter.com/Wftjl4yLon

White House Press Secretary Jane Sackie says the Biden administration is “deeply concerned” about the escalating violence between Israel and the Palestinians. “We are closely monitoring the situation in Israel and we have concerns about the current situation,” he said.

It may be recalled that during Friday prayers, the Israeli army entered Al-Aqsa Mosque and injured more than 300 worshipers. Violent clashes between Palestinian protesters and the Israeli police have escalated since the Israeli army’s crackdown.

Meanwhile, according to the latest reports, Hamas fired another 150 rockets at Tel Aviv on Tuesday night. Hamas says it is responding to an Israeli attack on a 13-story building in Gaza.