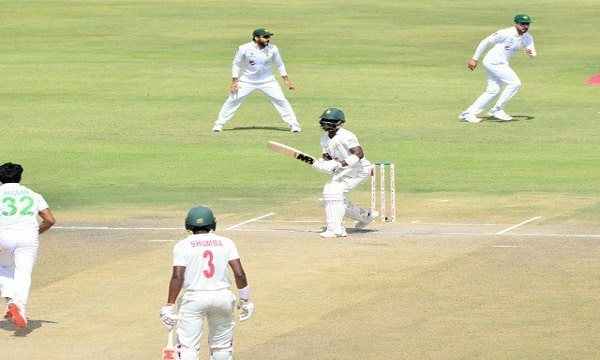 Harare: Zimbabwe Team is batting against Pakistan on the third day of the second Test, Zimbabwe has made 87 Runs for the loss of 7 wickets.

In the second Test of the two-Test series between Pakistan and Zimbabwe in Harare, Pakistan declared their innings at 510 on the second day after Abid Ali’s double century and Azhar Ali’s century in the first innings. He had scored 52 runs for the loss of 4 wickets by the end of the innings.

When Zimbabwe started the innings on the third day of play, another player was dismissed. Zimbabwe still needs about 450 runs to cover Pakistan’s first innings deficit while half of Zimbabwe’s team has returned to the pavilion there is a risk of follow-on.

Azhar Ali and Abid Ali completed centuries on the first day of the national team, but Azhar Ali was dismissed for 126 runs at the end of the first day. Captain Babar Azam scored 2 runs and Fawad Alam scored 5 runs.

Opening batsman Abid Ali continued his excellent batting on the second day of the game by scoring a double century off 393 balls in which he hit 27 fours. He remained unbeaten on 215 while Noman Ali scored his first half-century and unfortunately could not score a century with just 3 runs short. He was dismissed for 97 runs.

It should be noted that the national team has a 1-0 lead in the two-Test series. Pakistan had defeated Zimbabwe by 116 runs in an innings in the first Test.