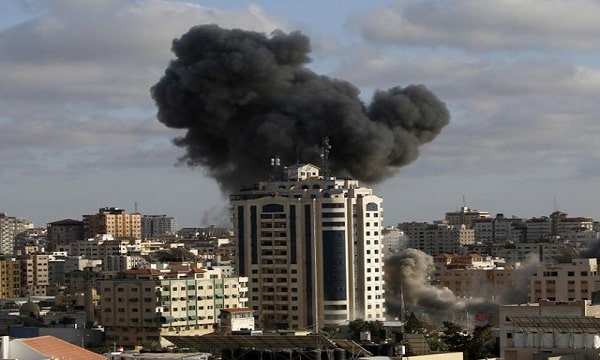 Gaza: An Islamic University building was completely destroyed in Israeli rocket attacks, while the number of martyrs in the eight-day bombing rose to 213, while Hamas rocket attacks on Israel also killed 10 Israelis.

According to the international news agency, the Israeli bombardment on Gaza continued for the eighth consecutive day. The Islamic University building was completely destroyed in the rocket attacks.

Fortunately, students and staff were not at the university at the time of the attack.

The eight-day Israeli bombardment of Gaza has killed at least 213 people, including 61 children, 35 women, and 16 elderly people, and injured more than 1,500.

Three multi-story buildings, including media houses, were completely destroyed in the Israeli attacks.

Meanwhile, US President Joe Biden has telephoned Israeli Prime Minister Netanyahu for the fourth time and assured support for a ceasefire in Gaza, while the US President has also approved the sale of arms to Israel, on which Muslim Member of Parliament Elhan Omar What a fierce protest.

Turkish President Tayyip Erdogan has sharply criticized the US approval of arms sales to Israel, saying that Biden has stained his hands with the blood of Palestinians by supporting Israel.