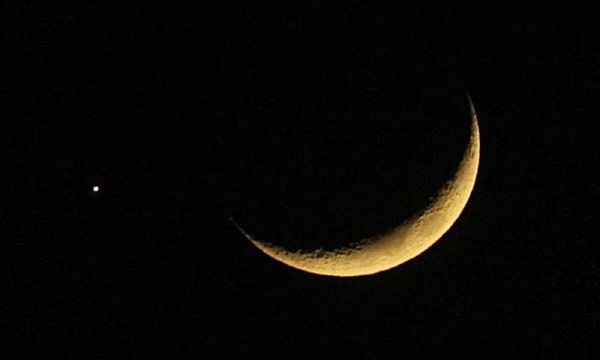 The Moon of Shawwal Have Seen, Eid-ul-Fitr Will be Celebrated Tomorrow in Pakistan

According to sources, the country’s Shawwal moon has seen, after which Eid-ul-Fitr will take place tomorrow.

Sources said that after a long meeting, the committee agreed that the testimonies of Chand were correct, so there would be Eid tomorrow, which would be announced soon by the chairman of the committee.

Meetings of zonal committees of Karachi, Lahore, and Sukkur ended and the moon was seen.

A meeting of the Central Route Hilal Committee is underway in Islamabad in which evidence related to the Shawwal moon is being collected.

Chairman Maulana Abdul Khabir is presiding over the meeting of the Central Route Hilal Committee in Islamabad.

Chand Mubarak. This is the night of reflection & rewards. This is the night to mend broken relations. To sit quietly with your parents and appreciate them. May you become a source of happiness for others. Do share. Do smile. Do pray for everyone out there. #Chandraat pic.twitter.com/SkIwTGTQPc

During the break of Maghrib prayers, Maulana Abdul Khabir Azad, chairman of the Central Route Hilal Committee, said that no evidence of moon sighting has been received from any area so far, wherever the evidence of sighting of the moon will be seen.

Former Minister for Science and Technology and current Minister for Information Fawad Chaudhry has said that according to scientific evidence, Eid-ul-Fitr will be on Friday, May 14.