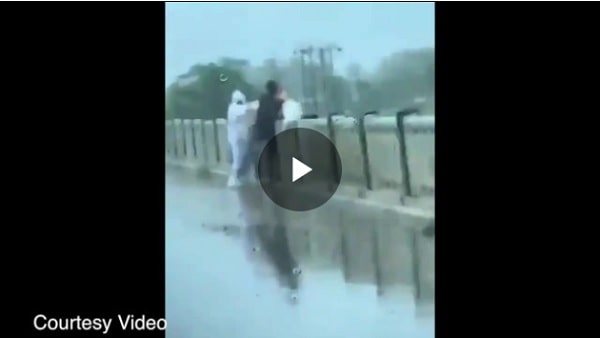 The deadly wave of the second wave of Corona continues in India, but the government’s stubbornness and hard-heartedness are not hidden from anyone.

Recently, a video went viral on social media in Uttar Pradesh’s Balarampur district in which the body of a patient killed by Corona could be seen being thrown into the Rapti river.

In the video, two men stand for the body, one of whom is wearing protective clothing from Corona.

Meanwhile, a man dressed in protective clothing is removing the body from the bag while the other is busy helping him.

In UP's Balrampur district, video of body of man being thrown in the river from a bridge has surfaced. The body was of a man who succumbed to Covid on May 28. pic.twitter.com/DEAAbQzHsL

This video was made by two passengers in the car.

According to Indian media, the Chief Medical Officer of Balarampur has confirmed that the body belonged to a patient of Corona while the relatives of the patient were trying to throw it in the river against whom a case has been registered and they have been arrested.

Preliminary inquiries revealed that the patient was admitted to the hospital on May 25 due to an epidemic and died on May 28. According to Corona protocol, the body was handed over to the heirs after which it was found out that they threw it in the river.

Earlier this month, dozens of bodies were found on the banks of the Ganges in the Indian state of Bihar and parts of Uttar Pradesh, all of them from Corona.