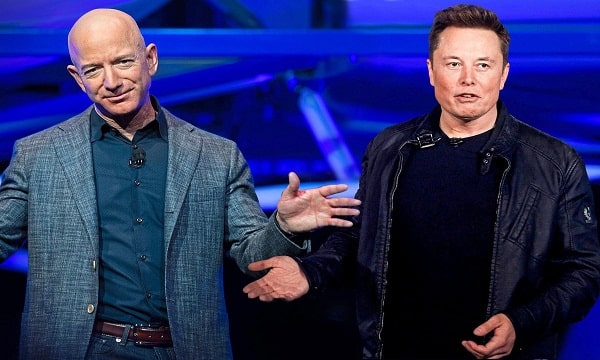 Amazon founder Jeff Bezos and Elon Musk, owner of Tesla and SpaceX, are the two richest people in the world who want to conquer space.

And that’s why a war has started between the two richest people in the world.

Blue Origin, a space company owned by Jeff Bezos, has announced it will go to court in protest of NASA’s awarding of various contracts to Elon Musk’s SpaceX team.

Jeff Bezos, 57, is the founder of Blue Origin as well as Amazon and the world’s richest man with 2 202 billion.

Elon Musk, 49, co-founded Tesla and SpaceX with other companies and is the world’s second-richest man with 182 billion.

SpaceX and Blue Origin benefit from the assets of their founders, but there is also competition between the two for US military or space agency contracts.

In this case, Elon Musk has a clear lead over Jeff Bezos.

SpaceX has so far sent hundreds of satellites into Earth orbit, while Elon Musk has also formed a partnership with Microsoft.

Microsoft is Amazon’s biggest competitor in the cloud market, using its Azure platform to provide Internet service with the help of SpaceX Satellite.

The partnership was announced in late 2020, and Microsoft also said it would work with SpaceX to develop brain-capable satellites under a government agreement that would track missiles and deliver them. Will be able to stop.

Last year, the US Department of Defense awarded a ارب 10 billion cloud computing contract to Microsoft instead of Amazon.

Amazon alleges that former US President Jeff Bezos and his company were opposed to the deal.

NASA has confidence in SpaceX, which has delivered astronauts and supplies to the International Space Station.

In contrast, Blue Origin did not win the trust of NASA.

Jeff Bezos announced his resignation as Amazon’s chief executive earlier this year and decided to work on other projects, including Blue Origin.

Jeff Bezos has made it clear that the Red Planet is not for human habitation.

During a conference in 2019, he said, ‘Who wants to move to Mars? So give me a feeling and stay on top of Mount Everest for a year and see if you like it, because it is no less than a paradise than Mars.

The competition between Elon Musk and Jeff Bezos is for financial gain from space.

Analysts predict that work on space revenue projects will begin soon and billions of dollars will be earned.

He said that Jeff Bezos and Elon Musk know that the winner of the space war will be decided in the next one to two years.