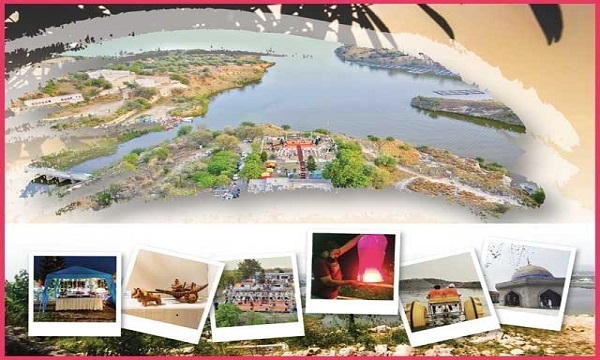 With the new government began great strides in the field of tourism. The tourism industry gained momentum and Pakistan was declared the number one tourist destination. But then the monster of Karuna came to the world.

Today, a year and a half later, we have largely won the war with Corona. The vaccination process has begun and at the same time the government has opened up to tourism.

The Punjab Government has also decided to open tourism with all SOPs and to expose the hidden and beautiful places of Chakwal District and promote eco-friendly tourism in the area, two days of water sports at Dharabi Lake and Klarkar. Hosted a family gala event.

The event was hosted by the Punjab Government’s Tourism Development Corporation Punjab (TDCP) and was exclusively for media persons, bloggers, tour operators, and vloggers, with Natchez also exploring as a TDCP.

Attended Punjab Magazine’s Travel and Feature Writer and saw the beautiful places of Chakwal hosted by the government from a tourist point of view.

During this excellent two-day trip, various activities were organized by the Punjab Government at Dharabi Dam and Lake, Klarkahar, Takht Babri, Klarkahar Lake and Museum, among which tree planting was at the forefront under the vision of Prime Minister Imran Khan.

The journey started from Lahore Double Decker Bus Terminal where Chairman Dr. Sohail Zafar Cheema was also present. After that, all the guests were given masks and sanitizers by the government.

All guests should board two buses to reach Klarkahar from Lahore via Bheera. After a sumptuous lunch at the TDCP resort, we were taken to Dharabi Lake, a short distance away, where many of the event’s activities were arranged.

The focus of these activities was Chakwal district which is an important district of Punjab and Pothohar.

Chakwal is also known as the “Lake District” of Punjab. There are many small and big lakes and ponds scattered here including Klarkahar, Dharabi, Lakhwal Dam Lake, Dhok Taliyan, Tharpal Dam Lake, Rama Lake of Katas Temple and Nile Vahan. The Punjab government is working to promote water sports in the district so that these lakes can be turned into a perfect picnic spot.

Lake Dharabi is a beautiful lake built on an agricultural dam on the river Dharab, which is just four kilometers away from the Blixar interchange of the motorway near the town of Dharabi. The Dharab River is a small tributary of the Sawan River which joins the Indus River through Sawan.

Dharabi Dam Reservoir is said to be the largest water reservoir in Chakwal district which is irrigating agricultural lands as well as having a positive impact on the environment.

A TDCP resort has been set up on the shores of the lake where an event was organized for all the guests. The function was inaugurated by Mr. Asif Mahmood, Advisor to the Chief Minister, Punjab on Tourism.

The rest of the guests also planted their own part of the plant which was provided by the Chakwal Forest Department. Fortunately, it was also World Environment Day and an environmental conference was underway in Islamabad.

Then the guests were taken on a boat tour of Dharabi Lake while new types of bicycle boats were also available here. After the briefing on environment and eco-tourism, a concert was held in which other folk artists of Chakwal including Mazhar Rahi showed the essence of their art.

The best documentary made by TDCP on Nandana Fort was shown on a big projector and there was also a quiz competition on tourism in Chakwal and Punjab. Artificial lanterns were left in the sky after the sumptuous dinner, which lit up the sky.

After the event the guests returned to Klarkahar but Mr. Ashfaq Khan, Tourism Officer of TDCP stopped there and cleaned all the garbage and proved to be an excellent Pakistani.

The next day after breakfast the guests were taken to visit Klarkahar Museum. ۔ This museum was opened especially for us on Sunday for which I am grateful to Abid Shaukat Sahib and Saeed Sahib.

The Klarkahar Museum opened to the public in April 2021 after a seven-year delay. This museum was very important for the area as the Pothohar and Son Valley area, which has a history of thousands of years, was devoid of any government museum. The Salt Range is known as one of the best reserves of animal and tree fossils, dating from the 7th to the 10th century AD.

Ancient Hindu temples under construction are also a feature of the area where experts have found many rare items. There are three different galleries in the Klarkahar Museum.

The first gallery is the Rakaz or Fossils Gallery, which showcases everything from sheep to goats found in the Bin Amir Khatun area of ​​Chakwal to the remains of elephants. Apart from these, ancient fossils related to ancient trees, snails and geology are also found here. The third gallery houses a variety of items, including traditional weapons, musical instruments, idols, utensils, jewelry and shoes.

Tourists visiting Klarkahar or the Valley of Gold must visit this museum.

Then we turned to Takht-e-Babri, which is built on a rock in the middle of Lokat’s gardens. It is said that when Emperor Babar set out from Kabul to conquer Delhi with his army, his army built a throne at this place where Babar addressed his army.

It is a large rock which The upper level has been leveled and stairs have been built to reach it. In addition to freshwater, the garden also has a spring of sulfur-contaminated water. Above this throne is the house of Assistant Commissioner Clerkhar and a beautiful rest house.

Finally, we visited the shrine of Hazrat Ahu Bahu Sarkar (some people also call him Ho Bahu) on the hill which is known as the local Moranwali Sarkar.

There are two shrines here. The mausoleum is an eight-sided mausoleum that is being built for the third time for no apparent reason. It is said that this mausoleum belongs to Hazrat Sakhi Muhammad Yaqub and Hazrat Sakhi Muhammad Ishaq who are grandsons of Hazrat Sheikh Abdul Qadir Jilani, Emperor of Baghdad. Along with this, an excellent mosque is under construction.

According to local tradition, when infidelity prevailed here, at the request of a lady named Sakina, Hazrat Sheikh sent his two grandsons to Klarkahar to help them.

On the way, his teacher Hazrat Sakhi Syed Fazil Baghdadi Hasani Hussaini also accompanied him with a pair of peacocks beside him. The same peacock lineage is still found around the shrine, which is why the owner of the shrine is called the “Peacock Government”.

On reaching Klarkahar, he met Mai Sakina and distributed the anchor. On the other hand, when the king of the infidels found out about this, he fought with you in which both the princes drank the cup of martyrdom and you were both buried on a hill. A week later, your respected teacher was also martyred and buried on the hill right in front.

It is said that no one reached these mountains for a long time. Then the feet of Sultan-ul-Arfeen Hazrat Sakhi Sultan Bahoo were blessed here and he blessed this place. These princes were given the title of Ahu Bahu and went on. People have been coming from that day till today.

There is also a cave here which is called the abode of Hazrat Sultan Bahoo but according to historical traditions, it was actually the abode of a slave faqir who came with him.

After that, we sat in a dolly which was a kind of desi lift. He dropped us off at the shrine of Hazrat Syed Fazil Baghdadi on the second hill. From the hill, one could see the beautiful view of Klarkahar city and the lake. After Fateha we saw the local bazaar of Klarkahar and headed back to the resort. After lunch we wrote down our impressions and thanked the TDCP. Of course, this organization had a great event.

TDCP has been introducing new destinations in Punjab tourism for years and this organization has proved that Punjab, like other provinces, has the potential for tourism.