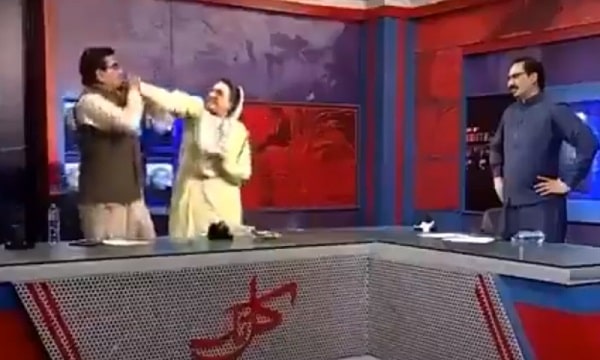 Both of them were guests in the program ‘Kal Tak’ of the private channel ‘Express News’ during which there was a heated discussion between the two.

In the viral clip about the incident, it can be seen that Dr. Firdous Ashiq Awan first adopts an aggressive manner and tries to grab Abdul Qadir Mandokhel by the collar which he rescues.

Meanwhile, a woman in the show’s team, Firdous Ashiq Awan, was also seen trying to control her.

On the other hand, anchor Javed Chaudhry was seen only verbally saying,

On the other hand, many people also criticized anchor Javed Chaudhry for not controlling the situation effectively.

Later in a video statement, Firdous Ashiq Awan alleged that in Javed Chaudhry’s program on Express TV, National Assembly member Abdul Qadir Mandokhel used obscene language against me, insulted me and my father during the break and Nazeeba uttered words regarding

Firdous Ashiq Awan said that the PPP leader abused, threatened and harassed him.

“Because of Abdul Qadir Mandokhel’s slander, I had to take this drastic step in my defense because my political reputation and honor were at stake,” he said.

“The video that was leaked was a selected video leaked. I would like the full video to be leaked so that the public can get the facts about how the PPP leader forced me to take this extreme step,” he said.

Dr. Firdous Ashiq Awan said that after consulting legal experts, I will decide against Abdul Qadir Mandokhel under Sections 62 and 63 regarding the case of harassment and defamation of a woman.

“I have the right to take legal action,” he said.

It may be recalled that about a month ago, on the occasion of Dr. Firdous Ashiq Awan’s visit to Ramzan Bazaar, an incident of ill-treatment of the Assistant Commissioner had come to light.

Firdous Ashiq Awan publicly humiliated AC Sonia Sadaf on May 2 during a visit to Ramzan Bazaar near Jinnah Stadium in Sialkot for not coming to greet him.