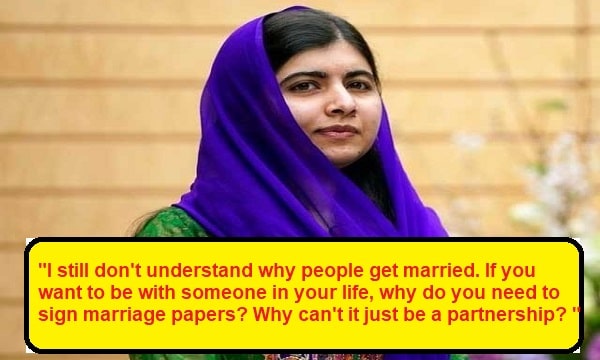 Nobel laureate Pakistani student Malala Yousafzai’s statement regarding marriage has become a top trend on the micro-blogging website Twitter and people are criticizing her statement.

Malala Yousafzai’s interview was published on the website of fashion magazine Vogue yesterday in which she expressed her views on marriage. According to Vogue magazine, Malala Yousafzai had said, “I still don’t understand why people get married. If you want to be with someone in your life, why do you need to sign marriage papers? Why can’t it just be a partnership? “

Malala Yousafzai’s statement has caused outrage among the people and people are posting their views on the statement on all social media networks. Malala remains a top trend on Twitter.

Everyone who was supporting Malala are like … #Malala pic.twitter.com/BRUi3C6dWA

Actress Mathira did not like Malala Yousafzai’s statement. He did not criticize Malala, but emphasized the importance of marriage in his long Instagram story. However, actress Veena Malik was seen angry over Malala’s statement. She also expressed her anger on Twitter.

So according to #Malala you can live with someone “without getting married” just as PARTNER, wearing Dupatta and promoting western thoughts is a reason why Pakistanis don’t support this HYPOCRISY anymore! pic.twitter.com/hSxEftxK4P

Mathira knows better than Islam and the importance of marriage than Malala.

Even mathira knows better than malala about Islam & the importance of Nikkah …#Malala pic.twitter.com/Py0tTF1h35

Another user said that from now on Mathira is more honorable to me than Malala.

Now For Me Mathira is More Respected Than #Malala ☺️ pic.twitter.com/gnAQNUU9XH

One user wrote that the bullet that hit Malala in 2012 has affected her brain in 2021.

Among all the Halal relationships, Allah SWT only said about this marriage relationship between husband and wife as one of his signs. #Malala pic.twitter.com/7Bz3Z02jyB

Everyone who was supporting Malala are like … #Malala pic.twitter.com/2v4H5RZlJ5