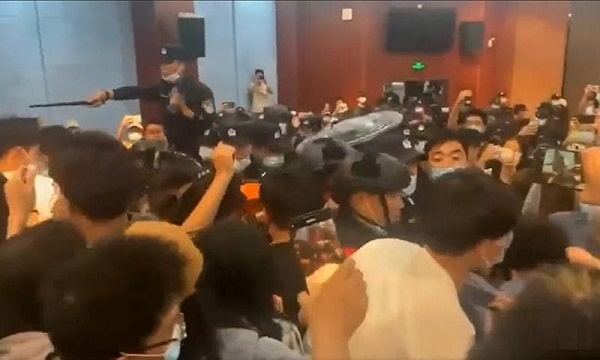 Chinese police say thousands of angry college students held the principal hostage for hours over concerns about their degrees.

According to the report, a riot broke out at Zhongbei College of Nanjing Normal University in the eastern province of Jiangsu when plans were made to merge the college with another vocational college.

The students feared that the accession would diminish the importance of their degree as they would lag behind in the competition for employment in China’s densely populated market.

The students held the principal hostage at the college for more than 30 hours, Danyang City Police said in a statement.

The statement said that some students also surrounded the officers and insulted them and prevented them from performing their duties.

Users on social media posted pictures of the protest, where police were charging and spraying batons on students and a female student were bleeding.

Police said in a statement that security measures were taken in accordance with the law to normalize the situation on the campus so that the beleaguered people could be released and the injured could be rushed to the hospital for medical treatment.

The hashtag “Students of Nanjing Normal University Zhongbei College were injured by law enforcement officers was also used, but the hashtag and images related to the incident were blocked on Weibo.”

A video circulating on Twitter shows dozens of police and security personnel harassing students in a crowded school hall.

An eyewitness, a student, confirmed the authenticity of the videos and photos, which were attended by an estimated 3,000 students and 400 police officers.

The student said that we were arrested but the police raided the college and tortured and sprayed the students, threatened and abused them.

According to the report, Jiangsu Education Department announced the affiliation of the college in March and said that it was being done on the instructions of the Ministry of Education, with the aim of integrating private colleges into vocational schools.

According to the report, five colleges had issued separate statements in recent days, assuring students that they would be awarded a university diploma despite the change.

A record 9 million students are expected to graduate from university in China this year, and this large number of students will face stiff competition in the market for employment.