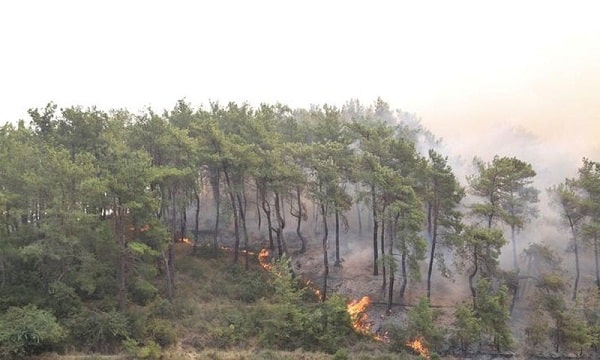 Four people have been killed and more than 180 injured in a series of fires in Turkey’s southern coastal region, while thousands of firefighters are battling the blaze.

Authorities have also launched an investigation into four suspected fires in the eastern part of the tourist destination of Antalya on Wednesday.

Turkish disaster and emergency services said three people, including an 82-year-old man, had been killed.

Massive wildfires rage in 20 locations across Turkey’s six provinces, while 43 fires have been brought under control – Turkey’s Agriculture and Forestry Minister pic.twitter.com/OVuowZpmYK

A NTV channel later reported that a 25-year-old man had also died trying to deliver aid.

The fire spread from a resort in a sparsely populated area 75 kilometers east of Antalya, popular with Russian and Eastern European tourists.

As it spread to coastal areas surrounded by hotels and resorts, footage on social media and Turkish television showed residents getting out of cars and fleeing for their lives on smoky roads.

So far, 183 people have been hospitalized.

A hotel has also been evacuated due to a new fire on the south coast, Agriculture Minister Bakr Bak Demirelli said.

At least three people were found dead as a massive forest fire continued to rage for a second day in southern Turkey https://t.co/NumYUJc6UM pic.twitter.com/SFWernheU4

He said that 53 fire incidents were reported in the country on Wednesday and Thursday, most of which have been brought under control.

He also said that 3 planes, 38 helicopters and 4,000 firefighters have been deployed to control the fire.

The minister said that one thousand cattle were killed and 120 acres of agricultural land was destroyed as a result of arson.

The AFAD Disaster Agency said forest fires had been contained at 36 locations, while efforts were being made to contain the remaining 17, with 140 people in need of treatment or damage to property.

Turkish authorities have launched an investigation into the blaze

The fire broke out at a time when the temperature had reached 40 degrees Celsius and the wind speed was 50 kilometers per hour.

However, the mayor of Antalya said he suspected a riot because the fire broke out in four places at once.

“It looks like an arson attack, but at this stage we have no concrete information,” he said.

On the other hand, Turkish President Recep Tayyip Erdogan said that an investigation has been launched.

The Turkish president’s director of communications also said that “those responsible for the attacks on nature and forests will be held accountable.”

The Russian embassy said Moscow had sent three large firefighting planes that would spray retardants on burning forests to control the flames.

In addition, the Foreign Minister of Greece, which has a bitter relationship with its neighbor Turkey, told his Turkish counterpart that they are ready to help if needed, while Azerbaijan has also offered help.

4,000 Turkish firefighters have been dispatched to help put out the fire and help the people in the region.