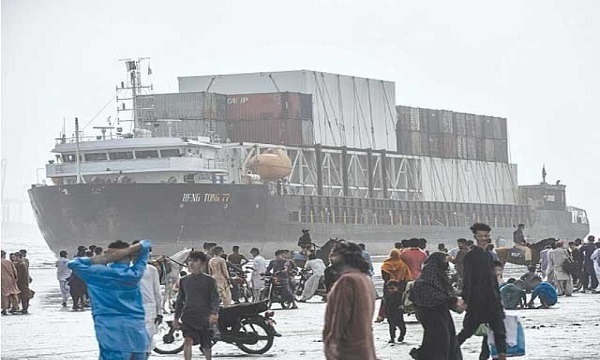 Karachi: New revelations have come to light in the case of a ship stranded on the sea view, which shows that the ship could have been rescued, but due to some issues, the ship was not allowed to rescue even after sinking in the sand.

Documents and messaging evidence available to the Express revealed that KPT had sent an estimate to the ship’s owner to evacuate the stranded ship. A KPT spokesman was asked whether the estimate was sent individually. Or the KPT officially showed this kindness but the spokesperson could not give any position.

Read Also: In India, a 17-year-old girl was killed for wearing jeans by her grandfather and uncle

A copy of the Port Disbursement Account sent to the ship’s owner has been received by the Express. Deputy Conservative M Altaf Awan, who sent the estimate, was also contacted for comment.

He read WhatsApp messages but refrained from answering or answering mobile phone calls. The officer who sent the estimated EPDA also sent the message directly to the ship’s owner on WhatsApp, an estimate sent by the PT’s deputy conservator. Gone who is about to retire in a month.

Sources said the estimate for the evacuation was sent without the approval of the KPT board. As a rule, estimates cannot be made without a request from the ship’s owner.

Experts say the Karachi port does not have the required equipment, so technically the port authorities cannot offer salvage operations on board.

The shipping company has decided to extract oil from the ship itself. The shipping company has informed KPT and other concerned authorities. There are 30/30 tons of diesel in 4 bunkers of the ship. Like large ships, the ship has a diesel load instead of black oil. Diesel will be kept in the Custom Bonded Warehouse by special tankers. After the ship is unloaded, the diesel will be loaded back into the ship.