At least 12 people, including nine engineers and two Frontier Corps (FC) personnel, were killed and several others injured in an attack near the Dasu hydropower plant in Khyber Pakhtunkhwa’s Upper Kohistan district.

Officials’ initial reports contradicted the prime minister, but Babar Awan, the prime minister’s adviser on parliamentary affairs, called it a “cowardly attack” in the National Assembly, saying it was a “special step” between Pakistan and its neighbors. Can’t get distracted.

Condemning the attack, Babar Awan said that he would ask Interior Minister Sheikh Rashid Ahmed to brief him on the security situation in the country and take the House into confidence over the incident.

Hours later, the Foreign Office denied reports of an attack, saying the bus had fallen into a ditch due to “technical glitches”, which resulted in a gas leak and an explosion

The Foreign Office also put the death toll at 12, including nine Chinese nationals, up from 10 previously reported.

Kamran Bangash, Special Assistant to the Chief Minister, Khyber Pakhtunkhwa, said in a statement to the media that a high-level delegation had left for Upper Kohistan to brief the people and media on the ground realities.

“The media is requested to refrain from speculation. A large number of Chinese security personnel were present,” he said.

“The critically injured are being airlifted to the hospital by Army helicopters while a large number of Rescue 1122 ambulances and personnel have reached the spot and are providing rescue services,” he said.

Meanwhile, China demanded a full investigation into the incident from Pakistan.

In a statement, the Chinese embassy in Pakistan “strongly condemned the incident” and offered condolences to the victims and injured, saying “we will do our utmost to work with Pakistan to address this issue.”

Pakistani authorities are said to be “investigating the cause of the incident”. 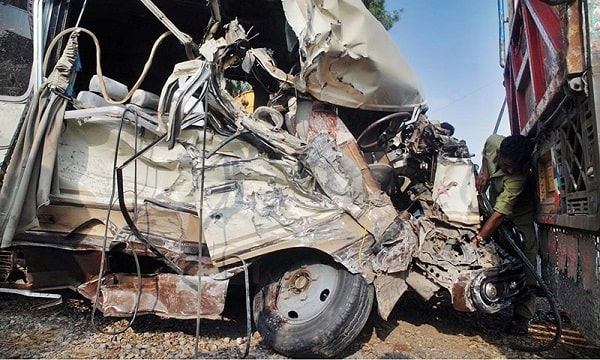 Immediately after the incident, Upper Kohistan Deputy Commissioner Arif Khan Yousafzai told Dawn.com that the incident took place around 7.30 am when a bus carrying 30 workers from Bursin camp was on its way to the plant site.

He said that at the time of the incident, foreign workers, including Frontier Corps personnel, were on board the bus.

The Foreign Office later said in a statement that the bus fell into a ditch due to a mechanical malfunction, which resulted in a gas leak and an explosion.

“Pakistan and China are close friends. Pakistan attaches great importance to the safety of Chinese citizens, projects and institutions,” the statement said.

Arif Khan Yousafzai said the cause of the accident was not yet known.

Meanwhile, the Water and Power Development Authority (WAPDA) in a statement termed the incident as an “accident”.

A WAPDA spokesman confirmed that employees of a Chinese company were traveling in the bus.

He said that rescue operations were underway at the spot and the injured were being shifted to the hospital.

Police and Rangers have cordoned off the area, he added.

The injured are being shifted to Dasu Rural Health Center, officials said.

A senior police officer told Dawn.com that it was not clear what caused the incident, adding that mobile networks in the area were not working, making it difficult to obtain information.

“It is not clear at this time whether it was an explosion or an accident, but it looks like an explosion,” the official said.

He said that the situation would become clear after the completion of the preliminary investigation by the police.

He said that Khyber Pakhtunkhwa Police Chief Moazzam Ansari had left for Upper Kohistan on a helicopter.