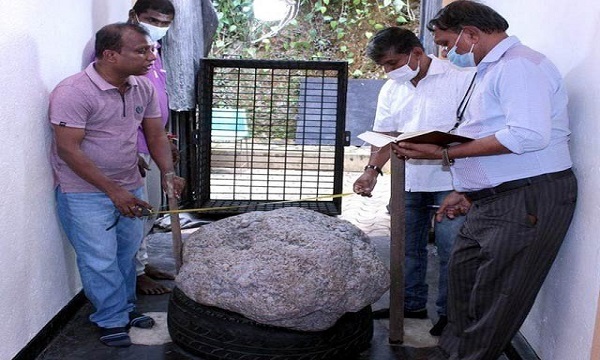 Sri Lanka: While digging a well in a house in Sri Lanka, there is a huge rock with sapphires on it and the initial value of all of them is said to be equal to 100 million dollars or 15 billion rupees.

According to the authorities, this is probably the largest store in the world where high-quality sapphires are stored in such a large number in one place.

The total weight of the elliptical stone is more than 500 kg, on which about 2.5 million carats of precious stones are placed. According to locals, the stone was found while digging a well behind a house in the Ratnapura area. It should be noted that this area is already world-famous for its sapphire deposits.

Experts have dubbed it ‘Lucky Sapphire’ on which the color of the jewel is light blue. “The first well digger told me he had found some rare sapphires, also known as star sapphires,” said Gamj, the owner of the house and the stone.

The third generation of gemstones is associated with the jewelry business. It has taken a year to clear this pile of stones and mud and extract sapphires.

During the cleaning, stones kept falling and all of them were of very high quality but their verification and certification process is still pending.

The name of the place from which this collection was found is Ratna Pura, which means ‘City of Jewels’. Sri Lanka earned half a billion dollars from diamond jewelry sales and engraving last year.

However, other experts have said that they have never seen such a large stock of sapphires before. Although it will now be reviewed by international experts, it is expected that the stockpile will improve Sri Lanka’s economy.