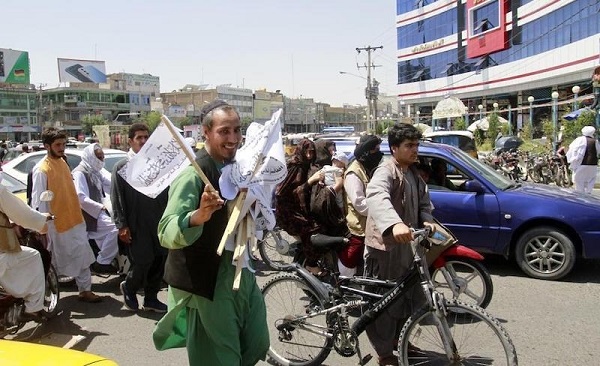 Taliban fighters have been allowed to enter the capital, Kabul, after Afghan President Ashraf Ghani and his close ally left the country, while Afghan and foreign nationals are evacuating.

Taliban spokesman Zabihullah, in a statement on the social networking site Twitter, ordered the militants to enter the capital, Kabul.

Two senior Taliban commanders in Kabul said they had taken control of the Afghan presidential palace, but the Afghan government did not confirm the Taliban’s claim, Reuters reported.

Two sources told the foreign news agency AP on condition of anonymity that Ashraf Ghani has passed away.

“They have left Afghanistan at a difficult time, God will ask them,” he said.

Read Also: Flights at Kabul Airport have Been Temporarily Suspended

“Ashraf Ghani has left the capital, Kabul, for Tajikistan,” Reuters quoted senior Interior Ministry sources as saying, but did not confirm reports that he had resigned.

In his video message, Abdullah called on Afghan security forces to play their part in maintaining peace in the country.

He also appealed to the Taliban not to do any harm or act in a way that would cause chaos in Kabul.

He said that Ashraf Ghani has left the country in difficult times, for which he will be remembered in history.

My message to the people of AFGHANISNAN, to the security forces and to the Taliban: https://t.co/MiFk0zaNRJ

When contacted, the Afghan president’s office said that “nothing can be said about Ashraf Ghani’s movements for security reasons.”

Ashraf Ghani, his close associates and foreigners are vying to leave the country with hints of the failure of the West’s 20-year experience of transforming Afghanistan.

On the other hand, Afghan leaders have formed a liaison council to negotiate a transfer of power with the Taliban.

Former President Hamid Karzai said in a statement that the council should be headed by Abdullah Abdullah, head of the National Reconciliation Council, which includes Hezb-e-Islami leaders Gulbuddin Hekmatyar and Hamid Karzai himself.

He said the move was aimed at eliminating uncertainty, alleviating the suffering of the people and a peaceful transfer of power.

The US embassy in Kabul said in a statement that the security situation at Kabul airport was changing rapidly with reports of gunfire as US troops were evacuating their officials.

“There are reports of shootings at the airport, so we are instructing American citizens to stay safe,” the embassy said in a security alert.

Sources monitoring the situation in Kabul did not confirm the firing at Kabul airport.

US Secretary of State Anthony Blinken had earlier said that embassy staff were leaving the compound for the airport as the Taliban entered Kabul.

Diplomats were being flown by helicopter to the airport, where US troops were providing security for their citizens, local allies and other foreigners.

Earlier, foreign news agencies reported that Taliban fighters had reached the outskirts of Kabul and that the troubled Afghan government was trying to form an interim government but had limited authority.

Citizens, on the other hand, feared that the Taliban would re-impose a repressive system that would deprive women of their rights, trying to flee the country, and long queues to withdraw money from machines.

The Taliban said they were looking forward to a peaceful transfer of power and vowed not to seize the capital, Kabul, by force.

In an online statement, the Taliban said they had instructed their fighters not to cross the gates of Kabul and seize control of the city by force.