Junaid Safdar, son of PML-N vice president Maryam Nawaz and Captain (retd) Muhammad Safdar, surprised everyone by singing at his marriage ceremony, whose videos are going viral on social media.

It may be recalled that Maryam Nawaz’s son was married on August 22 in a ceremony held in London in which he participated through video call.

Junaid Safdar and Ayesha Saif’s wedding photos are circulating on social media and now a video has gone viral in which Maryam Nawaz’s son is seen awakening the magic of his voice.

A professional singer was also hired for the wedding of Maryam Nawaz’s son, but the videos that went viral show that when Junaid Safdar was caught with a mic, he surprised everyone with his singing.

Remember that ‘Kya Hua Tera Waada’ is a part of the Bollywood film ‘Hum Kisi Se Kam Nahi’ which was released in 1977 but this song is still very popular today.

The video of this song sung by Maryam Nawaz’s son at his wedding ceremony is not only going viral but it is also being highly appreciated.

A user named Amna wrote that Junaid Safdar won hearts with his singing.

#JunaidSafdar wins hearts with his singing skills at his Nikkah ceremony. 🎤🤩🤩 pic.twitter.com/sAdtD3DzHh

Muhammad Owais said, “His voice surprised me. I will vote for him in the next election.”

Sanam Iqbal said that Junaid Safdar has impressed all of us with his mesmerizing voice.

In addition, another photo from the same event held on August 22 is going viral on social media in which Maryam Nawaz is talking to Junaid Safdar on a video call.

In the photo that went viral on Instagram, Junaid Safdar is holding a phone in his hand and Maryam Nawaz is on a video call.

In the photo, it can be seen that Maryam Nawaz, who participated online on the important day of her son’s life, is embroidered on her dress and she is wearing injections as jewelery.

It may be recalled that Junaid Safdar’s marriage ceremony was held at The Lance Borough, the most expensive and luxurious 5-star hotel in London.

The ceremony was attended by former Prime Minister Nawaz Sharif and former Finance Minister Ishaq Dar, Shahbaz Sharif’s son Salman Shahbaz and his wife, and others.

No details have been revealed as to which brand Junaid Safdar’s tuxedo belonged to. However, the bridal gown was designed by Indian designer Sabyaschi. 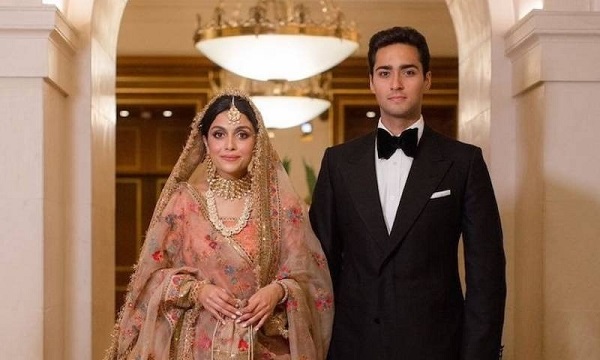 The event was held at London’s most expensive and luxurious 5-star hotel – Photo: Zahra Photography