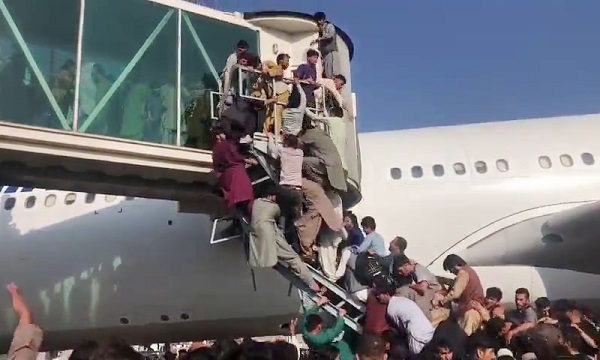 After the Taliban took control of the Afghan capital, Kabul, a stampede of Afghans seeking to leave the country erupted at the Hamid Karzai airport, killing five people as they tried to board a plane in chaos.

Hundreds of people tried to board the plane, killing at least five people, according to Reuters.

Initial media reports on the incident said that the killings were allegedly the result of aerial firing by US forces at Kabul Airport, who wanted to calm the crowd, which was rioting.

The Most Frequent Doubts About Travel Insurance
What is Insurance? What Types of Insurance Are There?

A U.S. official said the troops fired in the air to disperse Afghans trying to force their way into a military flight carrying U.S. diplomats and staff.

An eyewitness, who had been waiting for the flight for 20 hours, said it was not clear if the men had been shot dead or in a stampede, and that US officials at the airport were not available for comment.

In the video that went viral on social media, 3 bodies can be seen in the airport premises while an eyewitness said that they have seen 5 bodies.

The BBC later quoted the Afghan news agency Aswaka as saying that three people killed at Kabul airport were hanging on a plane and trying to travel abroad.

Exclusive – The video shows a flight from #Kabul airport where two people are thrown from a plane into the the people’s homes.#Afghanistan #Taliban pic.twitter.com/GlSgjNApJj

The report quoted Afghan media as saying that the three dead Afghans were hanging from the tires of the plane and as soon as the plane rose into the air, they fell to the ground and died.

Earlier, a video aired on local media showed hundreds of people fleeing alongside an American C-17 waiting for a flight from Kabul airport and trying to catch up.

Not a scene of Hollywood, it’s Just #Kabul air port, people want to run away, after the Capture of Kabul by the #Talibans #Afghanistan
By: @Mukhtarwafayee pic.twitter.com/ZLYieJm9mX

Hundreds of Afghans have been occupying the airport’s runway since Sunday night, trying to board the last commercial flight with their belongings.

“This is our airport, but we are waiting in uncertainty and watching the diplomats evacuate,” Rakhshanda Jalali, a human rights volunteer who wants to go to Pakistan, told Reuters.

This is, perhaps, one of the saddest images I’ve seen from #Afghanistan. A people who are desperate and abandoned. No aid agencies, no UN, no government. Nothing. pic.twitter.com/LCeDEOR3lR

Hundreds of Afghans have been occupying the airport’s runway since Sunday night, trying to board the last commercial flight with their belongings.

“This is our airport, but we are waiting in uncertainty and watching the diplomats evacuate,” Rakhshanda Jalali, a human rights volunteer who wants to go to Pakistan, told Reuters.

The airport is still managed by US forces, who also fired in the air to prevent Afghans trying to board a military flight from boarding the truck.

The video, which went viral on social media, shows dozens of people trying to board an overhead departure gangway to board a plane.

On the other hand, in a statement, the airport officials said that the operation of all commercial flights at Hamid Karzai Airport has been suspended and the people were urged not to crowd at the airport.

According to the Afghan broadcaster Tolo News, Kabul Airport has been facing a lot of crowds since Sunday night and about 2,000 people were present at the airport hoping to leave the country.

Meanwhile, evacuation operations are underway with the help of US forces.

The US State Department announced on Monday that it would take steps to address the situation, according to an AFP report.