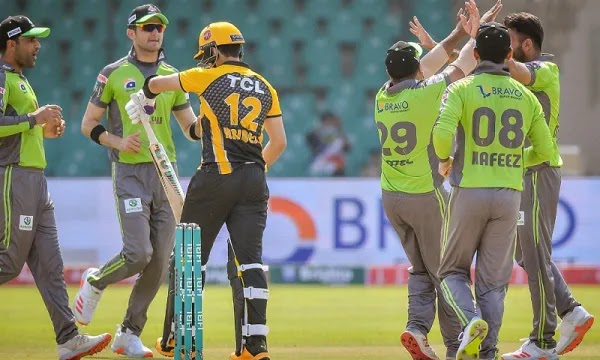 PSL 6: Zalmai’s 4 players out against Qalandars

In the match being played at the National Stadium in Karachi, Lahore Qalandar captain Sohail Akhtar won the toss and invited Peshawar Zalmi captain Wahab Riaz to bat first.

Lahore Qalandar started their first match of the season in a smoky manner and Shaheen Shah Afridi bowled Imam-ul-Haq off wicketkeeper Ben Dunk on the first ball.

The experienced duo of Kamran Akmal and Shoaib Malik advanced Zalmai’s batting but Salman Mirza of Qalandars did not give them much respite and sent Kamran Akmal, who scored 5 runs, to the pavilion.

HAIDER GOES FOR A GOLDEN DUCK 🦆 😳

Lahore Qalandars bowler Dilbar Hussain is not playing in the match due to a hamstring injury and Salman Mirza has been made a part of the team in his place.

At the very beginning of the match, Shaheen Afridi of Lahore Qalandars showed the way to the pavilion by dismissing Imam-ul-Haq of Peshawar Zalmi.

It may be recalled that the PSL officially started on February 20 at the National Stadium in Karachi where after the pre-recorded opening ceremony, a limited number of spectators sat in the stadium and enjoyed the match.

In the opening match of PSL 6 played yesterday, Karachi Kings made a victorious start in defending the title and easily defeated Quetta Gladiators.

If we talk about these two teams in today’s match, Peshawar Zalmi has managed to lift the trophy once in the PSL season played so far while Lahore Qalandar has not won the trophy yet.

Although Lahore Qalandars did not perform so well in the 4 seasons of PSL, they managed to reach the final in the last season of PSL, but they were defeated by Karachi Kings.

However, Peshawar Zalmi’s overall performance so far has been better than that of Lahore Qalandar and she also managed to lift the trophy for the second season of PSL.