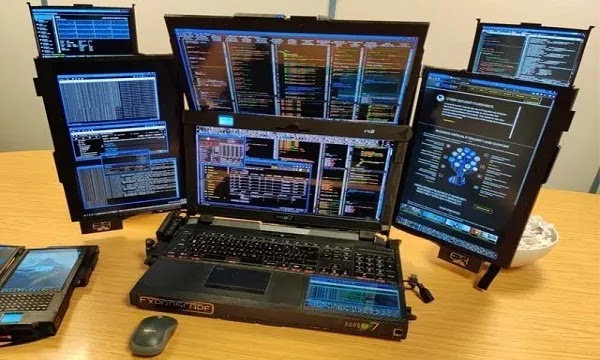 London: A British company has built a unique laptop in the world which has not one, not two but seven display screens that can be used for very serious tasks.

The computer is called the Expanscape Aurora Seven, developed by a company called Expanscape. It is designed specifically for cybersecurity, security camera footage, IT experts, designers, stock exchanges, and online trading experts.

But keep in mind that the laptop in the picture is not the final design, but a model designed to someone’s name, called a prototype. As news of the prototype went viral, the company received a flurry of orders.

But first, you have to write a letter to the company and sign an agreement that you want to buy a laptop with seven screens. After that, a significant amount will have to be paid in advance. But Expanscape has not yet announced the price.

It has four large 17.3-inch monitors, two of which are landscape and two are portrait-style. They all have four screen resolutions. There are also three seven-inch displays. Its robust structure handles all displays and looks like a laptop transformer.

According to the company, it has an Intel i9 9900 processor, 64 GB DDR4 2666 memory, and a hard disk capacity of two terabytes. But don’t assume that such an expensive version is made for gaming, but serious work can be done on it as described above. It has separate batteries for computers and displays that last up to two hours.