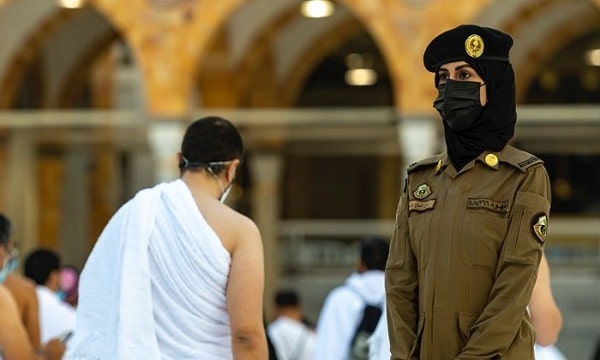 There are rumors on social media about a female security official in Makkah.

The Saudi Interior Ministry shared a photo on its verified Twitter account of a female official on surveillance duty for the safety of pilgrims.

In the viral pictures on social media, it can be seen that during the Tawaf, the female security officer is ready to organize the Tawaf by following the SOPs of the rescue from Corona.

According to the Haramain administration, female officials are providing guidance and other facilities to female Umrah pilgrims.

Earlier, women security personnel were also deployed in the administrative and technical departments of mosques.

This is how users on social media are praising the female official.

A very proud and important sight. #saudi female guard looking after pilgrims and the Grand Mosque in Mecca 💚 https://t.co/ME0CN522Vy

Great move that we see Saudi women as part of the security guard in the Holy Mosque in Mecca 🕋 https://t.co/7cQKrDS1wA