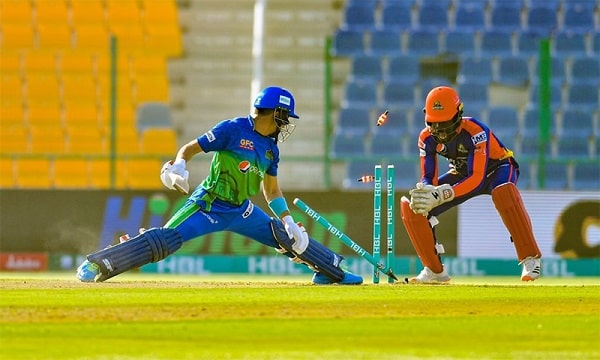 PSL 2021: Sultans Set a Target of 177 Runs for Victory Over Karachi Kings

In the match of the sixth edition of Pakistan Super League (PSL), Multan Sultans gave a target of 177 runs to Karachi Kings for victory.

In the 16th match of the league being played in Abu Dhabi, Karachi Kings won the toss and elected to bowl first.

Watch the live match on PTV Sports Youtube Channel or You can also watch the Live Match between Islamabad United vs Lahore Qalanders on the PTV Sports live in Pakistan, In India on Star Sports 1 and Star Sports 1HD, and in South Africa on SuperSport live.
If you want to watch the ball by ball commentary visit the cricbuzz to watch ball by ball commentary and scoreboard.

Captain Emad Waseem has already led the team to victory in the over.

After that, Sohaib Maqsood came to the aid of captain Mohammad Rizwan and together they took the score to 40 but at this stage Sohaib’s innings of 31 runs off 14 balls came to an end.

New batsman Riley Rauso also played Rizwan well and both added 68 runs for the third wicket in which the left-arm batsman’s share was 44 runs.

On a total of 108, Karachi achieved its third victory when Thisara Perera took Perera’s valuable wicket.

In the same over, the Sultans suffered another major setback when captain Rizwan was forced to return to the pavilion after a brilliant throw from the boundary.

West Indies’ Shamron Hittmeier’s innings could not go beyond 7 runs and thus the Sultans lost the fifth wicket.

After losing five wickets, Sohail Tanwari came to Khushdal’s side and both of them batted responsibly in the closing overs to give their team access to a reasonable total.

The duo put up a 48-run partnership which helped the Multan Sultans to 176 for five in the allotted overs.

It should be noted that Karachi Kings are second in the points table and Multan Sultans are fifth with only one victory.

Both teams consist of these players for the match.