Quora News: Fans have been criticizing the story of former model and fashion designer Fareeha Altaf after the release of the trailer of her soon-to-be-released first web series ‘Dai’.

‘Dai’ will be released on July 23 this month on the streaming website ‘Urdu Flex’, in which Fareeha Altaf will appear in the role of ‘Shaitan’.

The story of ‘Dai’ is written by Syed Mohammad Ahmed while it is directed by Farrukh Faiz.

“Dai” is produced by Noman Mujeeb Khan and Farhan Gohar and will feature Fareeha Altaf and other actors in the web series for the first time.

Fareeha Altaf has also appeared in short roles in dramas and films before her debut in the web series, but for the first time, she will be seen in the lead role.

The midwife’s trailer was released on July 3, warning that only adults over the age of 18 can watch the trailer.

In the trailer, Fareeha Altaf is portrayed in the role of ‘Satan’ and she is seen having a dangerous and illegal abortion at her clinic.

The story of the midwife revolves around illegal and aborted abortions and the individuals and entities involved in this black business.

After the release of the trailer of ‘Dai’, many people expressed their anger and termed the story of the web series as untrue.

Many people criticized the team of the web series and reminded them that such dangerous and illegal acts of abortion are not made public in Pakistan but the series has tried to give the impression that this act is as usual. 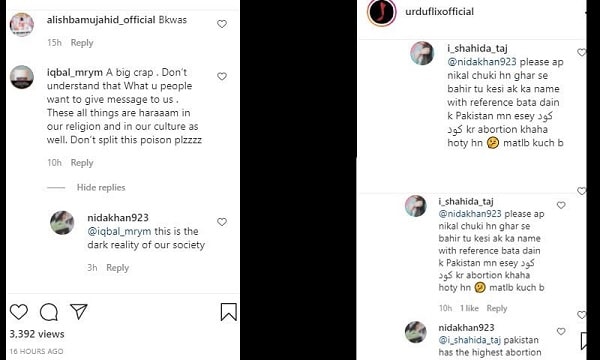 Many people called the story of the web series the opposite of reality; screenshot

Many people said that although abortions would be illegal and dangerous in the country, the web series tried to show that there is no obstacle in such illegal activities.

Some people also called the scenes in the web series and the language used in it inappropriately and immoral.

On the other hand, Fareeha Altaf, who played the lead role in the web series, while talking to Urdu Flix, said that she enjoyed playing the role of ‘Satan’ and her character has different forms.

According to Fareeha Altaf, she enjoyed playing the ‘devilish’ role and now she realizes that she should only do web series.

He termed the stories of the web series as closer to reality and said that most of the films and dramas are fictional and spicy.