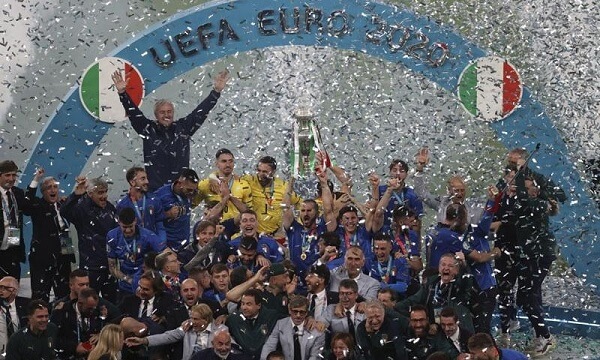 Quora News: England beat Denmark by 2 goals to one in extra time in the semi-finals to enter the final.

London: Italy, which did not qualify for the 2018 World Cup, defeated England to become the Euro Cup champions.

According to the foreign news agency ‘AP’, the match between Italy and England was decided on penalty shots after a tough match at Wembley Stadium, after which Italy won the Euro Cup title for the second time.

England entered the semi-finals by defeating Denmark by 2 goals to one in extra time.

England’s Lok Shaw scored in the second minute of the first half to give the team a psychological lead, but Italy’s Leonardo Bonucci scored in the 67th minute to level the match 1-1 and put the team under pressure. Taken out.

There was an aggressive contest between the two teams and in the first 90 minutes one goal was tied, after which neither team could score in extra time and the matter came to a penalty shootout.

During the post-victory ceremony, Leonardo Bonucci of Italy looked at the camera and said, “This is Rome coming, this Rome is coming”, in fact he had mocked the famous song of the England team’s anthem, “This is coming home”. ۔

The Italian people took to the streets to celebrate the victory.

This year’s scheduled football matches, the Euro Cup and the Copa America, have been postponed for a year due to the rapid spread of the coronavirus globally.